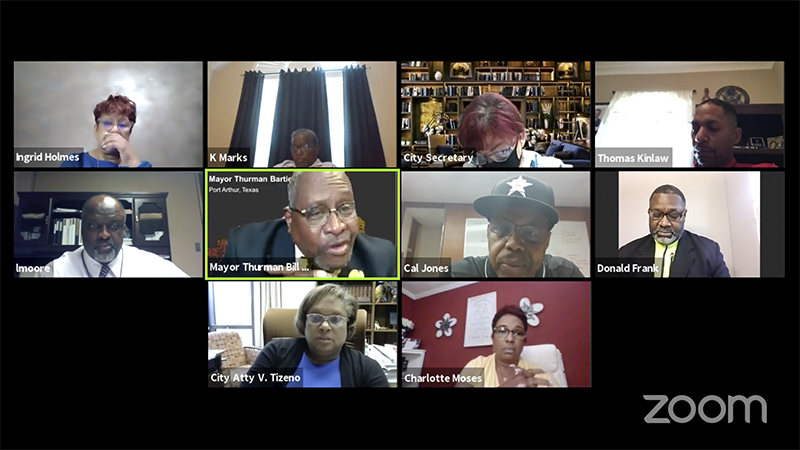 Following a month of discussion and a subsequent presentation by the city secretary, Port Arthur councilmembers will return to in-person meetings in July.

However, those wanting to participate through Zoom will not be able to do so until at least September.

At the last regular meeting, City Secretary Sherri Bellard was asked to prepare a report showing how council could safely move back into City Hall after hosting meetings through Zoom since April 2020.

The report, presented to council Tuesday, included adding 32” to 36” Plexiglas shields around socially-distanced councilmembers at the cost of $8,900.45; entering into an agreement with a sanitation company to clean and disinfect the chambers before and after each meeting at the cost of $1,381 per meeting; and the installation of wires and software allowing simultaneous Zoom participation for $7,589.95. 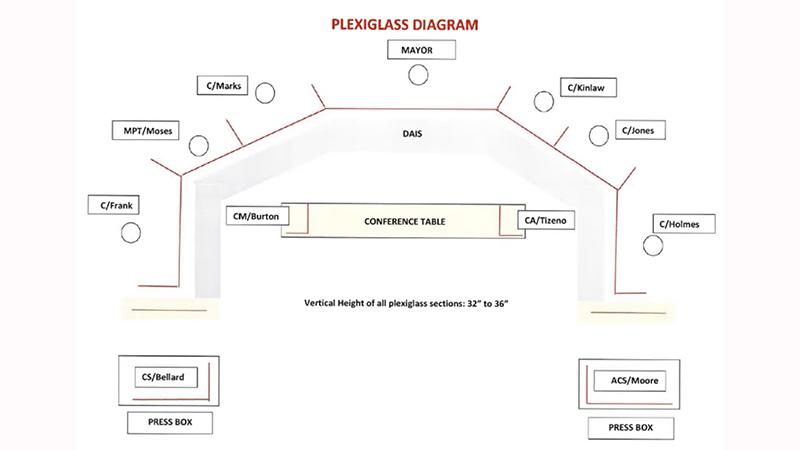 City Secretary Sherri Bellard presented a diagram to council showing what the chamber would look like after social distancing and the installation of Plexiglas. (Zoom screenshot)

The latter, however, will not be possible until the fall due to the vendor’s availability and instillation time.

Mayor Pro Tem Charlotte Moses questioned the need to continue with Zoom, since the council was live streaming meetings prior to moving strictly online.

“My suggestion to the council is continuing with our live stream but having the protective measures in place, washing hands, social distancing, limiting the number of people in the chamber,” Moses said.

“That’s just an option some cities are doing because there are people who don’t want to wear a mask and say they have a First Amendment right to speak,” she said. “Some cities are completely back; some cities offer both.”

Bellard told council members that the live stream previously used has a 2-3 minute delay, which could pose potential violations to the Open Meetings Act.

“The code says you must (be able to) observe a person’s demeanor as they are talking,” she said, specifying it went for residents and city representatives.

While a majority of councilmembers was in support of installing the Zoom option at the fastest available time, they were not willing to wait until September to return to City Hall.

“City Hall employees come here every day and work,” said Councilman Cal Jones. “So we go upstairs and have our Plexiglas and social distance and have our masks. Let’s go upstairs and go to work. Our city employees, if they can do it every day faithfully, we can certainly come up here twice a month. The Plexiglass, that’s perfect. Let’s do it. We don’t need to wait until September.”

As he has since the conversation began, Mayor Thurman Bartie continued to err on the side of caution.

“I understand everyone wants to move as expeditiously as possible,” he said. “We have the option right now to do it right going forward. Now we don’t want to jump and make (city staff make the safety changes) by May 1st and then it’s not done right, then in three months we have to shut down again because it’s not right.”

But councilmembers were adamant about returning to City Hall as soon as possible.

“The technical side of it — I’m hearing two different things that don’t matter to what we are saying,” said Councilman Thomas Kinlaw III. “I’m saying that we have employees, administrators and staff that’s working on a daily basis. The leadership of Port Arthur is still talking about whether or not we go back two times a month.”

Kinlaw said live streaming would continue and those wanting to speak to the council could follow safety protocols for their allotted time.

“If someone wants to come and speak before the council — for your safety and our safety — you have to wear a mask for the 3-5 minutes you’re speaking before the council, then you can leave. We’re not trying to take anyone’s liberties away from them.”

Council agreed to return in person for the July 6 meeting.