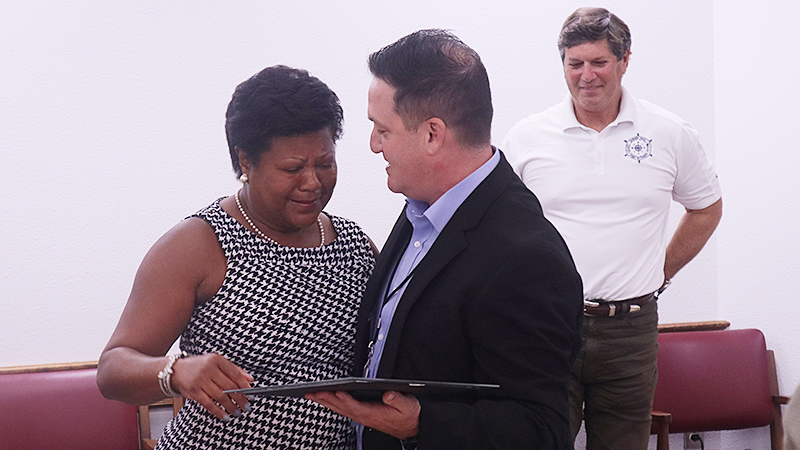 A clearly emotional Pat Avery, left, thanks Joe Tant and others for their support. (Chris Moore/The News)

Avery was at the Port of Port Arthur administrative building for what she believed was a routine meeting to receive an update on the state of affairs in the city. The event was kept secret from her.

Avery was engaged in the meeting, getting updates on land and water projects in and around the city, as well as a progress report on the port.

Avery acknowledged visitors as they walked in a room that was slowly reaching capacity. However, the number of familiar faces didn’t seem to unveil the morning’s surprise.

After about an hour of updates, longtime chamber financial director Joe Tant interrupted the proceedings to present a very surprised Avery with the proclamation, which was signed by Mayor Thurman Bartie. Moments prior to the unveil, Tant was able to sneak the framed proclamation out of a storage space and past an unsuspecting Avery, who was conducting the meeting.

Avery was instantly emotional. Not only because of the recognition, but because of the significance the date already holds in her heart. Avery revealed that she lost two nieces, ages 25 and 4, on April 27, 2011. One of the nieces was named after her.

“I never had any children of my own,” Avery said. “She was the only child that had my namesake…I feel like they are here with me right now. Thank you so much. I can’t thank you enough really.”

One of Avery’s friends said she always knows to keep her friend in her prayers during April because of the emotional toll it takes on Avery.

The chamber president and CEO has held the title since March of 2019. She was an energy company executive and business consultant prior to taking over the chamber.

“I haven’t done nearly enough,” she told the crowd. “I can do a lot more and I will.”

Tant told Port Arthur Newsmedia that he credits Avery with the chamber’s ability to maintain during the coronavirus pandemic by using social media and outreach efforts. Tant cited Avery’s ability to change and take in all viewpoints as true sources to her success.

The morning event showed the potential for the city. The love and appreciation for those who work hard was evident. It seems as though the more Pat Averys a city has, the better off the city is. The leaders of Port Arthur seem to recognize that as well.