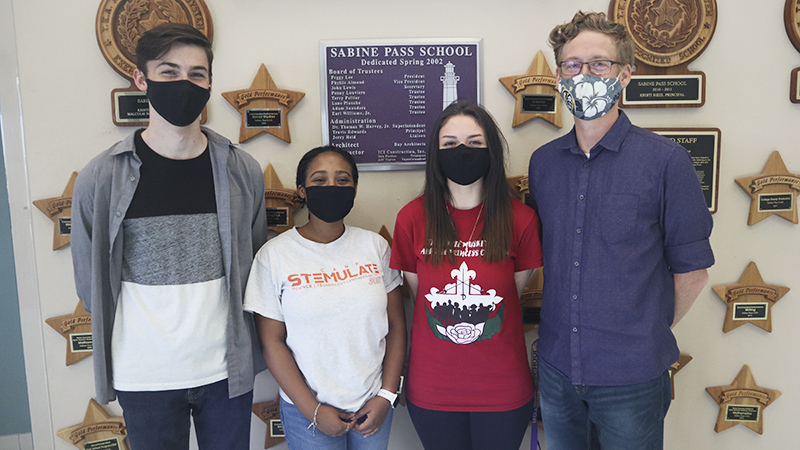 Pictured, from left, Caleb Morgan, Cyndey Jones and Veronica Reyes will compete at the state level with their One-Act play under the direction of their teacher Chris Rector, right. (Chris Moore/The News)

SABINE PASS — The Sabine Pass One-Act play is off to Seguin this week in hopes of earning the title of back-to-back state champs.

The school won the state title in 2019, which was the last time there was a competition due to the pandemic.

Chris Rector, who has run the program at Sabine Pass for five years, said he is proud of the group, which is made of mostly seniors.

“The show is called ‘The Woman With the Eternal Smile,’” he said. “It is an original script, so it is brand new. It is something we adapted from a Victor Hugo novel with a really long French name.”

The show has three leads, Rector said. Seniors Veronica Reyes and Caleb Morgan and junior Cydney Jones each play characters around which the story revolves.

“Interestingly, they have gotten best performer separately at each of the contests,” Rector said of his leads. “It’s funny the way that has been passed around between the three of them.”

Morgan said it is cool doing something that not a lot of people have done.

“For our freshman year, we did a play that hadn’t been done in American One-Act before,” Morgan said. “(Rector) does a lot of stuff that is new and a lot of stuff that wasn’t out there before. It is cool to take charge of something that is new and that not many people know about. It is cool to technically be the original cast of an original play.”

Reyes said the group has grown together and has been pretty strong for a long time.

“(Rector) came five years ago, so we have had him since eighth grade and middle school,” Reyes said. “Since then, we have done all types of exercises in his class. We have had fun and we took that into One-Act the next year. We have that strong foundation because of Mr. Rector. I think the consistency has been through the roof the last few years and now we get to share it with people coming in.”

Jones said she enjoys that expectations are high with the program.

She wants to live up to the legacy the seniors are leaving behind.

“I came in when they were in 10th grade,” she said. “When I came to them, I was timid to do things and they broke me out of my shell. This year, I didn’t expect to be a lead in a play. Now that I have been able to do it, it has been an honor.”

As for competing during a pandemic, the students have plenty of experience getting through adversity.

“One-Act has made the year fun,” Morgan said. “I think every single year is challenging. We had hurricanes. We had pipes burst in the dressing rooms. Now, we’ve had COVD.”

The students will perform Wednesday and get the results Thursday, Rector said.