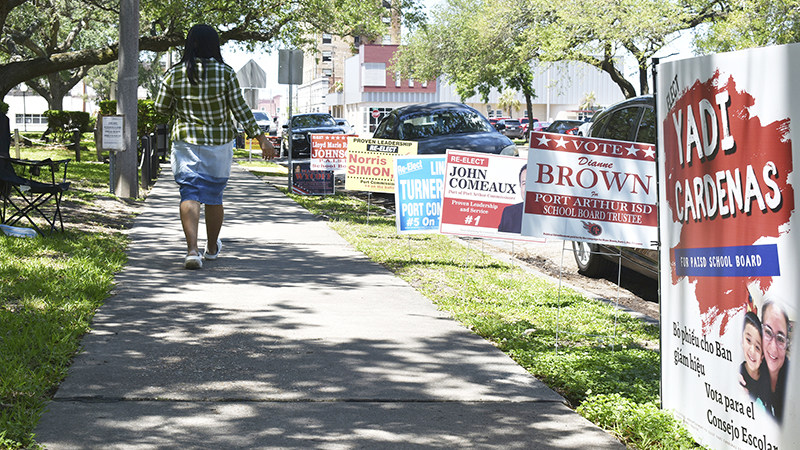 A woman walks past candidate signs outside the Jefferson County Sub-courthouse in Port Arthur on April 20. Early voting in a number of Port Arthur races is ongoing. (Mary Meaux/The News)

Early voting for the May 1 joint election ends Tuesday (April 27), where Port Arthur voters will elect school board trustees, port commissioners and decide the fate of enhancements to several parks and a senior center.

The PAISD trustee election has three, 3-year seats and the unexpired 1-year term left vacated by the Rev. Donald R. Frank Sr., who left the school board and earned a seat on Port Arthur City Council.

Three incumbents and three newcomers have all filed for the three vacant seats on the board. They include incumbents John A. Comeaux, Linda Turner Spears and Norris J. Simon.

The newcomers are Gerald Hatch Sr., Mary Wycoff and Charles A. Joseph.

City of Port Arthur, Proposition A

Voters in the city will decide if Port Arthur Type A Economic Development Corporation sales and use tax funds should be used for enhancements at Adams Park, Rose Hill Park and the Recreation and Senior Citizens Center at the rate of $1 million per year for three years with an option to renew for an additional three years at $1 million per year.

Early voters can cast ballots at any of the following locations: