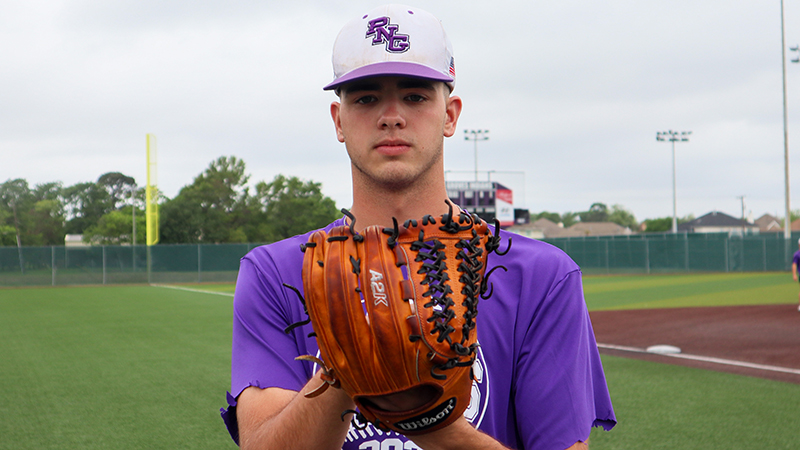 Port Neches-Groves pitcher Thomas Reinholt has come into his own this year, leading the Indians to a playoff berth. (Chris Moore/The News)

PORT NECHES — For a pitcher in “the zone,” the game slows down, the strike zone widens and the pitcher can place the ball with unreal precision.

“It feels amazing,” Port Neches-Groves pitcher Thomas Reinholt said. “Some days, you come out here and you can spot up any pitch you want any time you want it.”

Reinholt is coming off what he considers his best game of the season in a 7-1 win over the No. 5-ranked Barbers Hill Eagles.

The senior pitched seven innings and struck out nine batters. On the season, Reinholt has thrown 47 innings and has 77 strikeouts.

“I was able to go seven innings and throw 93 pitches,” he said. “I was living in the zone.”

Heading into the season, coach Scott Carter said he knew Reinholt would be the team’s ace, but added he has been pleasantly surprised by how well the senior has produced this season.

“We didn’t know he was going to be as good as he has been,” Carter said. “His confidence level rose and his ability rose. He is playing extremely well. He gets on the mound and expects to win. That is what you have to do as a pitcher. You have to command the game and he does that.”

Reinhold found his confidence fairly early in the season. During the first tournament, PNG matched up against 6A Tomball, which is when Reinholt said he felt like he could have a good season.

“I hit 88 mph,” he said. “That got me feeling good. That was the fastest I had thrown. They were a good team. They have six (Division I) players.”

Catcher Ryan Sosa has played with Reinholt since they were 11 years old. Sosa said he always knew his friend had the potential to do well and is happy to see him thriving in his senior season.

“In February, he started spotting it up real well and that is when I knew this could be a good season for him,” Sosa said. “His slider came in and it was perfect.”

Reinholt said his slider is his best pitch. His catcher agrees.

“Honestly, it is magical how is comes in,” Sosa said. “It has a big bite to it but it is more sweeping and it throws the hitter off completely, especially with the velocity it is coming in with. His fast ball goes around 85 and he throws about a 75 slider.”

Reinholt said accuracy is key to a good slider.

“I just try to spin it as much as I can,” he said. “I have always been pretty accurate with it and can usually put it on a dot.”

Carter said the pitcher’s best attribute is not anything he does physically.

“Everyone follows him,” Carter said. “Everyone is looking at the pitcher on every pitch. Everyone sees how he is reacting to everything. He doesn’t react if he gives up a hit, gives up a walk or gets the guy out. He just competes. The only time you get emotion out of him is when the third out is made. He comes to the dugout excited and is ready to do it again.”

The Indians clinched a playoff spot this week and will finish their season next week with a two-game series against Galena Park.