Smoke on the Water Cook Off this weekend launches RiverFest fun 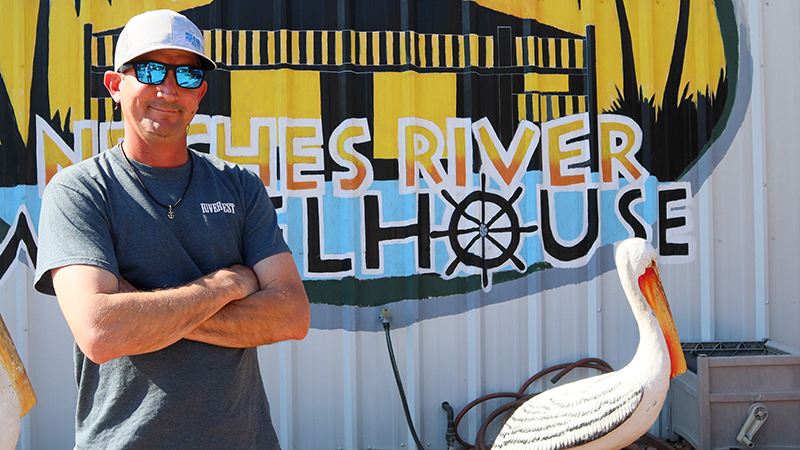 Brandon White serves as the Smoke on the Water Cook Off chairman. (Chris Moore/The News)

PORT NECHES — Those looking to get in the RiverFest spirit won’t have to wait much longer as the Smoke on the Water Cook Off is slated to take place this weekend at the Neches River Wheelhouse.

Cook-off Chairman Brandon White is excited to get the festivities underway. This is the fifth year the event has launched RiverFest.

“We got a late start this year because we did not know if we were going to be able to do it,” he said. “We were behind the gun on getting teams together and getting it out there, but we are glad they are going to get kicked off.”

Entry forms can be found on the RiverFest website. The entry fee is $150 and includes a 75 percent payout.

Teams will check in at 9 a.m. Friday, followed by a meeting to go over rules around 6 p.m., White said.

White said in years past, the cutoff for signing up for the cook off would close several days before the event.

“This year, being that it was so late, I am going to take teams up until 5:30 Friday evening,” White said. “It is going to make it harder on me but the more teams we can get, the better.”

“We will be selling tickets to come around,” White said. “We will announce some of those things as we get a little closer, where they can come out and actually taste the barbecue. People will be able to actually judge what team they like the best. We give out trophies for first through third.”

The chairman said he is working out the details early this week to ensure there will be live music at the Wheelhouse.

“We are planning on having a live band on Saturday,” he said.

While White said he is usually pretty busy during the events, he tries to make his way towards one contest in particular.

“I love brisket,” he said. “If I get a chance after everything is done, I’ll grab me a couple of pieces here and there and try it out.”

White said he is still in need of judges. Anyone interested in becoming a judge can reach him at 409-284-4407.

See how you can join Port Arthurans in helping…