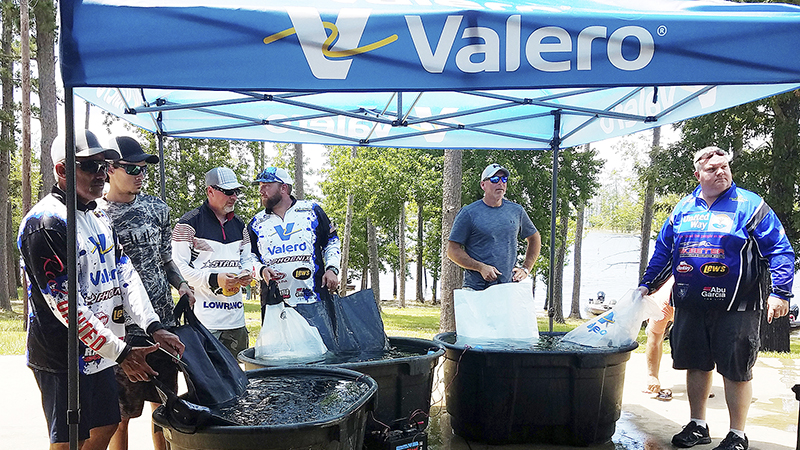 A scene from a Reel United fishing tournament. (Courtesy photo)

Community engagement and employee voluntarism have long been a part of Valero Port Arthur Refinery’s story.

From hosting successful United Way campaigns and benefits that go to help children, to Meals on Wheels and fishing tournaments; Valero has been at the forefront of it all.

Valero volunteers work many hours every year helping organizations and residents, according to information from the company. Last year, 20 charities benefitted from Valero’s volunteerism and more than 8,400 hours of service was provided, despite limitations from COVID-19.

Valero employees also serve on a variety of nonprofit boards of directors.

The Valero Cook Team is a group of tireless employee volunteers that cook at events across the community and have fed thousands.

The volunteers spend hours preparing and cooking meals to help those in need. or just to show support for a community program. In September 2020, the Valero cook team and its volunteers traveled to Lake Charles to serve families impacted by Hurricane Laura.

The team partnered with the Salvation Army to serve more than 600 families a warm meal and provide Valero fuel cards to those in need. The team is known to cook for large family events such as Kids’ Fest held annually in Port Arthur and the Beaumont Police Department Cops & Kids program.

“We enjoy giving back to the community,” Drake Thibodaux, Valero cook team coordinator, said. “There is nothing better than watching people enjoying the food we’ve cooked.”

For more than 15 years, Valero employee volunteers have been delivering meals to home-bound seniors living in Port Arthur. 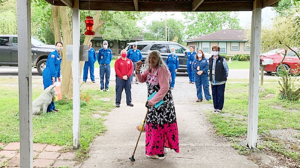 More than 70 volunteers manage the daily route and pair up to take turns delivering meals to the seniors’ homes. Despite COVID-19 restrictions in 2020, the group provided more than 550 hours of volunteer service for Meals on Wheels.

“You get a lot from giving to others,” Mary Bass, longtime volunteer, said. “It’s not just monetary giving that makes a difference, it can be giving your time or having a listening ear.”

Because the seniors see the same volunteers on a regular basis, relationships are formed and they ask each other about family members.

“Sometimes we are the only one they see in a day, and we’re the one there to listen,” Bass said.”

Not only are the recipients grateful for the food and company, but at times the visits have been life-changing, a spokeswoman for the company said.

One senior was found lying on the floor of the home and the Valero volunteer called paramedics for assistance. The senior was experiencing low blood sugar from diabetes and thankfully was fine after medical assistance.

Another time, volunteers identified seniors with hearing impairments that made it difficult for them to hear the doorbell or knocks at the door. So, the Valero team purchased flashing doorbells to signal the seniors when visitors were at their door.

Another heartwarming story is that of “Mrs. Mary’s” 88th birthday during COVID-19 and the car parade arranged by the volunteers to celebrate her special day. The Valero fire truck led the processional of volunteer cars decorated with balloons and posters displaying birthday messages.

Mrs. Mary’s daughter texted one of the Valero volunteers to express her appreciation for making her mother’s birthday such a special day.

The good deeds continue with the inception of a fishing tournament to promote employee engagement and strengthen workplace relationships.

The event began three years ago and was the idea of Valero employees Dustin Loden and Justin Peltier. 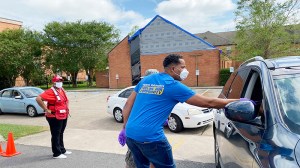 A Valero employee hands a meal to a family during an event in partnership with the Salvation Army. (Courtesy photo)

After developing a business plan demonstrating the tournament could make a profit, the pair organized the first Reel United fishing tournament in 2018 with proceeds benefitting the United Way of Mid & South Jefferson County.

With the help of Kristal McKay, an officer with the Valero Volunteer Council, the first year had 95 boats participate, raised more than $22,000 for the charity and accumulated approximately 2,200 employee volunteer hours. The following two years raised $34,000 and $52,000 respectively and participation increased to as many as 160 boats.

COVID-19 delayed the usual date of the tournament, but the community still came out to support the event in December 2020. This year, the tournament is expected to draw more than 200 boats to the event.

“Everyone loves it. Valero employees came from other locations in Texas and as far away as the refinery in Oklahoma,” said Dustin Loden, tournament chairman. “The tournament caters to the amateur fisherman and has lower entry costs, making it accessible to more individuals.

“The night before the tournament features a welcome dinner, flipping contests and a live band. Some Valero employees and their family members come that don’t even fish. They just want to enjoy the festivities and hang out with co-workers and friends.”

“It’s great to be part of a company that values community involvement and inspiring to see the great work our volunteers do in the neighborhoods where we work and live,” Skobel said.

Other ways Valero gives back

The Valero Port Arthur Refinery hosts the largest workplace campaign on behalf of the United Way of Mid & South Jefferson County and projects to donate $1.5 million to the organization in 2021.

Since 2005, Valero and its Port Arthur employees have collectively raised more than $10 million for the United Way. The United Way partners with 23 local agencies to fight poverty, invest in education and work to improve the health of the community.

The Valero Benefit for Children, the Valero Energy Foundation’s annual charitable golf fundraiser focusing on children in need, follows the annual Valero Texas Open. Net proceeds from the Benefit for Children event are distributed to children’s charities in communities where Valero has major operations, such as Port Arthur. The result is a network of strong, well-supported agencies with the means to help thousands of disadvantaged children.

Locally, the Port Arthur site has been able to donate more than $10 million to charities serving children in Southeast Texas since 2005.

For example, in 2020, Port Arthur ISD received a $250,000 donation from the Valero Benefit for Children to upgrade computer technology for its students, and the Southeast Texas Food Bank received $100,000 for its backpack program benefitting schools in PAISD.