See which Memorial, Nederland and PNG athletes qualify for regionals 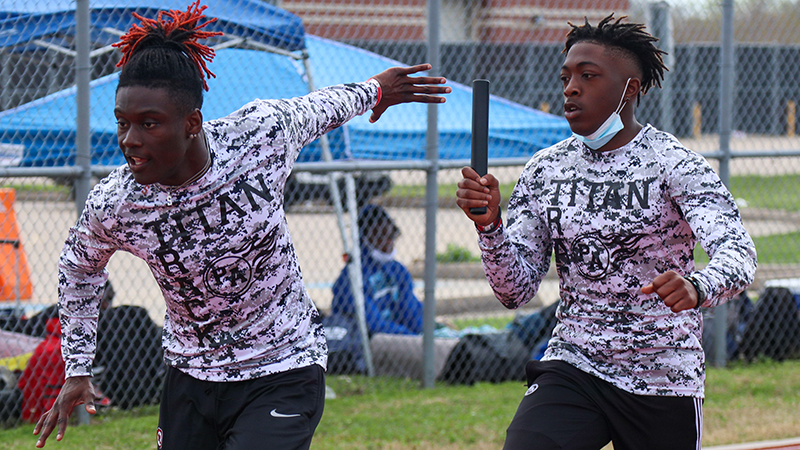 Several athletes from Memorial, Nederland and Port Neches-Groves qualified for next week’s regional meet in Humble.

Memorial’s student-athletes qualified for four field events along with the four track events. Sophomore Ayden Chatman came in third in the 800-meter run, behind PNG’s Cyrus Jacobs, who came in second.

Memorial’s Tyrence Augusta and Jah’mar Sanders came in second and third, respectively, in the 100-meeter dash.

Paris Martin, Alexia Lewis, Rayven Martin, Erial Fontenot and Saniah Bethea made up the Titans girls 4×100 and 4×200 teams that qualified for regionals.

“The main thing is that we are advancing,” Memorial coach Darrell Granger said. “That is the name of the game right now. With that being said, when you come out with 11 events and you advance in eight, that is a very good day.”

Granger said he wants to see the handoffs improve for his relay teams before the regional meet next weekend.

“We have to clean those up,” he said. “A lot of time this year we were mixing and matching to find out the best order to go with it. This week, we have to focus in on that exchange zone and getting that stick around and keeping it moving.”

Granger said he has a lineup in mind for the 4×100 but did not want to disclose it to keep practices competitive.

“I think the way we are going to run it in the regional meet is going to be a good way for us to advance to the state meet,” he said.

Nederland’s Ke’Asia Hall qualified for each of the four events in which she participated.

Her coach Allie Crommett said Hall is peaking at the right time.

“She went into (the area meet) seeded fourth in a lot of events and sixth in the 200,” Crommett said. “She knew that she was going to have to go and compete really well if she wanted to get out, especially in the individual events. It was funny. She was watching the boys triple jump first. I told her that she needed to sit down and rest and that she had a big day ahead, but she kept saying that she had a lot of energy and was ready to go. She had a really great mindset.”

“Her going four for four was awesome,” Crommett said. “We weren’t surprised, but we didn’t expect for her to come out and compete as well as she did.”

Hall qualified for the triple jump with a second place finish and the 100-meter dash with a third place finish. The junior broke her own record when she finished second in the 200-meter dash. Hall also anchors the 4×200 relay, which broke a school record this week. The relay team is also made up of three freshmen in Camryn Slott, Lana Louvier and Kamryn Smith.

For PNG, Jacobs qualified for the 800-meter and 400-meter runs with second-place finishes. He was also part of the 4×400 relay team that qualified with a third place finish, along with Isiah Nguyen, Dylan Lawless and Hunter Brown.

The regional meet will take place April 23-24 at Turner Stadium in Humble.

Check this out to see the local standouts in the field events.