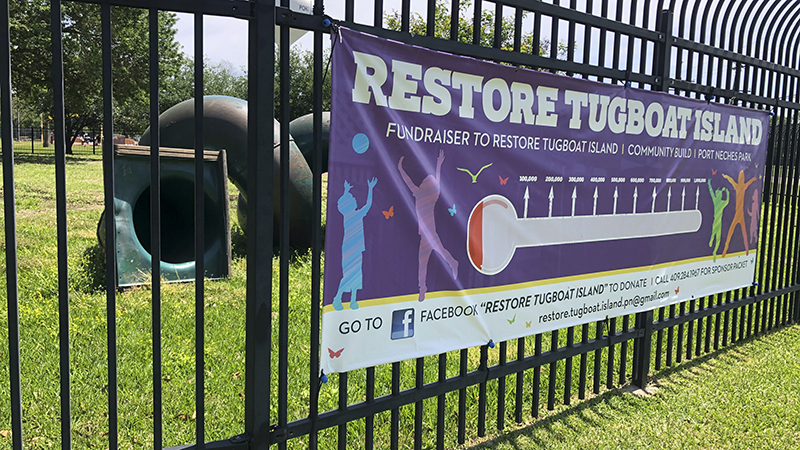 A “Restore Tugboat Island” sign hangs on the fence that once surrounded the playground. (Monique Batson/The News)

And while I knew the park was torn down in November, I haven’t had to think much about it as COVID-19 precautions kept me primarily indoors. But driving by the other day, I caught my first glimpse in 25 years of the empty lot with nothing but a fence and remnants of “the dark slide.”

I was 15 when Tugboat Island was built — which is the perfect age to go with a group of friends, one you probably had a crush on and would playfully chase in and around the tiers of wood and pillars. (That was after you had started across the street and attempted to run up that terrible metal slide thing that would inevitably melt the skin off your legs on the way down.)

Later it became the place to take my young children, chasing them around the tiers of wood and pillars before spending 15 minutes convincing them they wouldn’t die if they attempted “the dark slide,” knowing it wasn’t going to happen.

Then came the days when the kids chased each other, made it down “the dark slide” head-first, and I would sit back under the shade with headphones, soft music and a book.

And most recently, before the pandemic, it was the place my teenage kids would go with a group of friends, one they probably had a crush on and would playfully chase in and around the tiers of wood and pillars.

So, like everyone else in Port Neches, I joined the restoration groups on social media and waited to see when it was time to grab a hammer and head out.

The original structure was built in 11 days for approximately $234,000 using all volunteer labor. But a recent survey and estimation of cost put a new build with a 20-year life expectancy at about $1 million.

As I was scrolling through restoration pages this week, I came across the digital fundraiser, seeing only $2,240 of $1 million had been raised. Now that may not be an accurate summary since the fundraiser has been replaced by a “donate” button on the page.

But with the riverfront boom and more people coming through that area, I began to wonder how long the empty lot would be allowed to stand.

In March it was announced a two-story food court would be built along the river, plans for an Iguana Joe’s have been made and then there’s the already-popular Neches River Wheelhouse.

And right down the road there’s an iron fence around a giant empty patch of grass.

Rita Morgan, with Restore Tugboat Island, said plans to rebuild are moving forward. The group was granted 501(c)3 status by the Texas Comptroller in January. And fundraisers will soon begin, which will include a brick sale, as was done when the park was first built. The original bricks were kept and will be incorporated into the new park.

In December, elementary-age students in Port Neches and Groves worked on design ideas for what they would like to see and returned them to the group in January.

But when it comes to raising funds, there’s a long way to go; and it will take the entire community to help make it happen.

So I urge everyone to get involved where you can. Email restore.tugboat.island.pn@gmail.com and see where assistance is needed. Join the Facebook group and toss out some fundraising ideas. Host your own fundraiser to donate towards the park. Or, just go to the page and donate a dollar or two.

One day, when I have grandkids, I’d like them to know the fear of “the dark slide,” conquer it, later hang there with their teenage friends, and continue the circle with their own children.