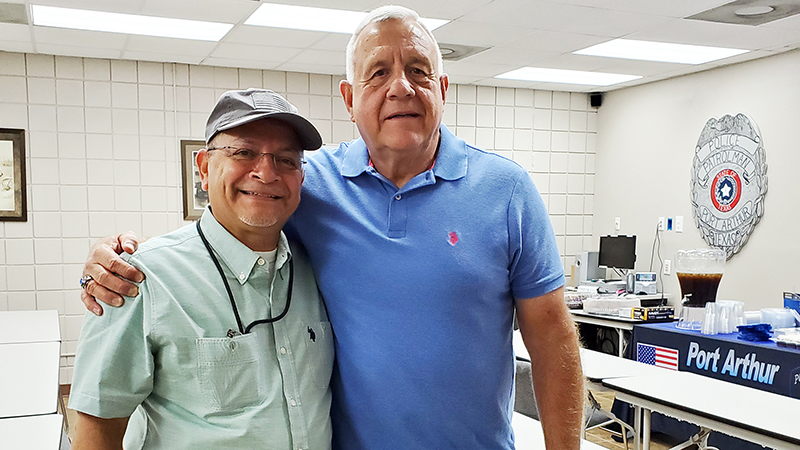 John Owens’ retirement ceremony was more than a year late, but that didn’t stop well-wishers from gathering to congratulate the veteran police officer.

Owens, who most recently served as deputy chief of the Port Arthur Police Department, actually retired on April 3, 2020. But due to COVID restrictions, the celebration as postponed. On Wednesday came the speeches, handshakes and plaque for his 36 years and two months of service.

In addition, Owens was appointed to the Governor’s Texas Emergency Management Advisor Council representing the Southeast Texas region, elected to two terms as president of the Sabine-Neches Chief’s association and remains a member, is a gradate of the FBI National Academy and has received a number of commendations.

Words from his past co-workers led to laughter, applause and reflection. 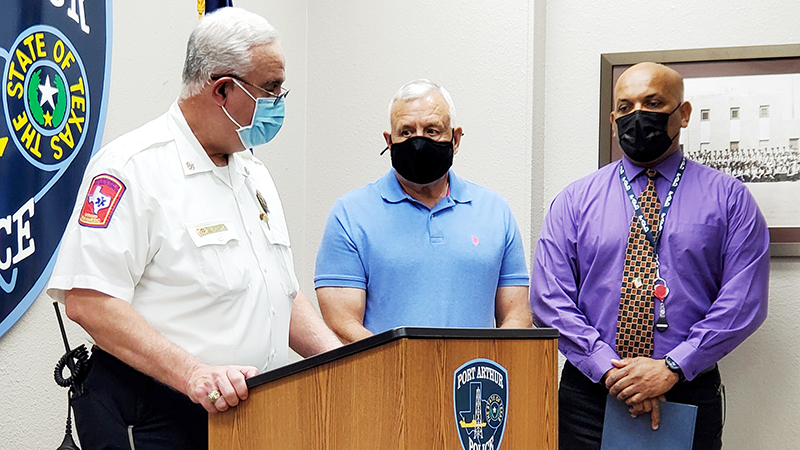 Deputy Fire Chief and Emergency Management Coordinator Robert Havens said, “it has been a wild ride” as he noted the city has done more evacuations than others in the nation but that is a story for another time.

There was also the story of the time Owens commandeered a C17 cargo plane that Havens said he would save for another day.

“There’s a lot of camaraderie between the police department and the fire department in the city, and we owe it to John, because the kind of person he is,” Havens said.

“I’m going to call him meticulous,” Arviso said prior to the start of the ceremony. “He took notes when he met someone on the street. It was alphabetized and organized. If he met them, they were in the book, a small 3-ring book.”

Retired Fire Chief Larry Richard gave a quick story of how he and Owens worked on a grant for the purchase of a mobile command center. By the time the unit was ordered, Hurricane Rita had hit the area and two years had passed without taking ownership of the command center, he said.

A phone call was made and soon they got sight of the command center, which was basically a frame with two pieces of metal and wheels.

The departments did eventually take acquisition of the mobile command center.

Owens may be retired but his work is not done. During the past year he assisted the police department in areas of emergency management and as consultant and continues to lend assistance as needed, Duriso said.

“John was an is a valuable asset with a wealth of knowledge and experience,” Duriso said. “We wish him the best.”

Owens will continue to serve the department as a contractor. 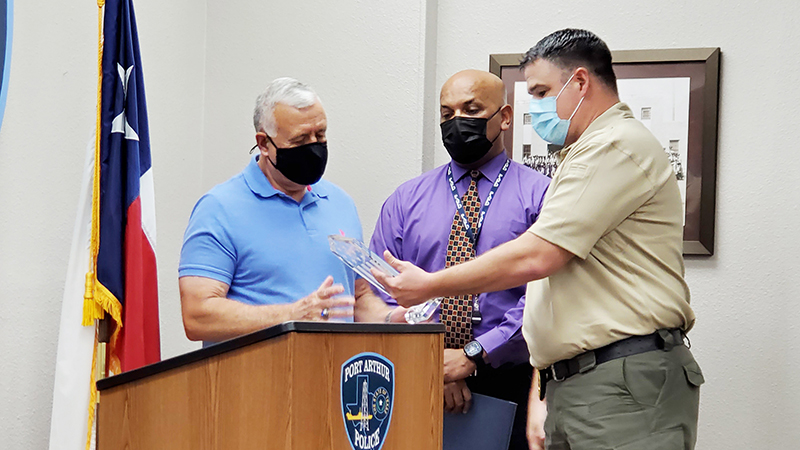 “It’s been a year since I retired. So it’s kind of funny. I don’t care what day it is, I don’t care what time it is. That’s a wonderful thing,” Owens said of being retired. “I’ve been blessed with good health. I’ve been blessed with a wife that keeps me alive for 46 (years of marriage). And I’ve got good family members, a daughter-in-law that keeps me in shape and makes sure I take care of myself. So, I’m enjoying life. I miss a lot of you, and I mean that sincerely. But I don’t miss the stress.”

He said he didn’t really understand when people told him it would take a few months to get used to retirement, but now he does.

“It’s true,” he said. “You don’t realize how much stress you’re under, and it’s just inherent to the job until you are away from it for a little while, and there’s nothing anybody does. It’s just the nature of the beast. I’ll tell you what, when you heard me say earlier (about retirement) I highly recommend it.”

Also in attendance was his wife Sharon, son Michael and Michael’s wife Susan. His other son Wade was unable to attend.