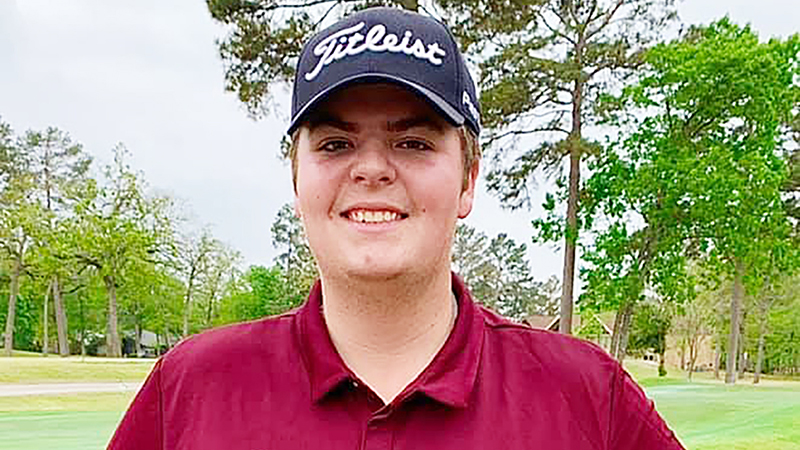 Every time Little Cypress-Mauriceville senior Jack Burke wins another tournament or breaks another record, Texas State golf coach Shane Howell has to salivate a little more over the towering, talented young man who will become part of his program next year.

The victory at Crown Colony may well be the shining star of a sterling career that at least puts the 6-4, 276 pound Burke in the conversation with the schoolboy feats of Bruce Lietzke, Chris Stroud, Andrew Landry and Braden Bailey.

It came against college players and other veteran golfers seeking the prestige of qualifying for the storied Texas Amateur.

Burke, who carries a 4.87 GPA at LC-M, first made recruiters sit up and take notice as a sophomore. He won eight times that year, culminated by the 4A state championship.

The COVID pandemic denied him a chance to repeat last year, but his recent strong play suggests he’s the man to beat in 2021.

“Jack is getting better and building confidence,” says 5 Under Golf Center’s Austin Williams, who is sort of Burke’s co-instructor, along with former Lamar golf coach Brian White. “He went through a period last fall where he struggled with his swing, but he’s worked so hard since then and it is really paying off.”

Burke, who is no relation to legendary Houston golfer Jackie Burke Jr., is literally a man against boys in area high school tourneys. He’s walked away with championships in 23 of 30 starts over four years, including four district titles. Counting all the events he’s played as a junior golfer, Burke has claimed 151 championships in 248 tourneys.

Prior to prevailing in the Texas Amateur qualifier, the highlight of his senior season was shooting a 64 at the Country Club of Texas in the Nederland Invitational. It was an LC-M school record and is believed to be an area schoolboy record.

A week later he shot a 66 on the way to winning the district title by 12 shots.

Burke’s honors and achievements go on and on. He’s soon to become the three-time Babe Zaharias area Player of the Year.

He’s twice played on the Southern Texas team in the Texas Cup and twice been selected for the Texas-Mexico Cup. He’s had two top 5 AJGA finishes and earned full exemption status on the AJGA Tour from 2019-21.

Williams contends the best is yet to come, ticking off attributes like maturity, swing speed in the 115-to-120 range, the ability to fly his driver close to 300 yards and great touch around the greens.

“When he’s having a good day with a putter, he’s going to go low,” said Williams. “He’s got the kind of game that will travel well. He’s just a great young man whose future is really exciting. If he continues to work hard and really be invested in the game, he will be a factor at the next level.”

The future for Burke starts with next week’s 4A regional in Huntsville, then it should be on to Austin and the delayed defense of his state title. After that the next big opportunity comes in the Texas State Amateur June 16-20 in Midland.