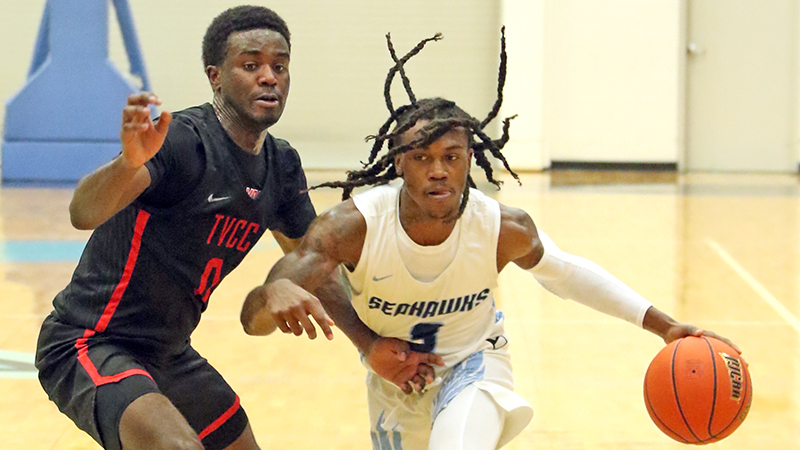 Burney, who came to the Seahawks in 2019-20 out of Dallas Skyline High School, earned first-team honors as he was the third-highest scorer in the 12-school league in 2021, averaging 20 points per game.

He led the league with 4.1 3-point field goals per game and hit 8 to lead a Feb. 6 upset of Blinn College, tying the then-school record. He averaged 36.4% on 3-point shots, ranked fourth in the league in steals (1.8 per game), ninth in assists (3.8 per game) and averaged 5.5 rebounds per game.

He was fifth in the league in 3-point baskets (3.4 per game, 37.8% accuracy) and set a new Seahawks school record with nine 3-pointers in a 30-point performance against Trinity Valley in a quarterfinal loss in the Region 14 tournament April 8.

A 6-foot-guard, Archibald started each of the Seahawks’ 23 games and led the league in minutes played (811). He added 5.8 rebounds, second best among Seahawks, and 3.7 assists per game.

He scored 30 points twice in the season, scored 20 or more 11 times and reached double figures in points 16 times.

Lucien, a 6-foot-7 forward from Beaumont West Brook who started all 23 games for the Seahawks, was selected honorable mention on the All-Region 14 team.

He had the season’s best single-game scoring performance for the Seahawks, 34 points against Panola College on March 6. That was one of a pair of 20-plus games and he had 14 double-digit scoring outings.