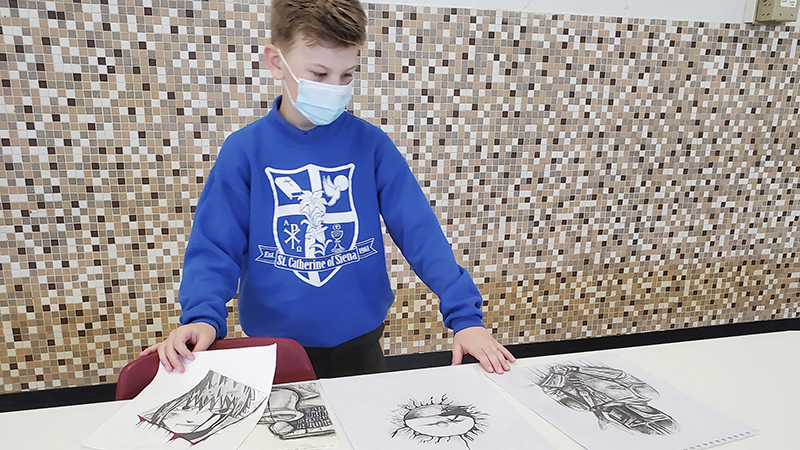 Marcus Files, a fourth grade student at St. Catherine of Siena Catholic School, sorts through some of his artwork. (Mary Meaux/The News)

Marcus Files may only be in the fourth grade but he has made a mark on those he meets.

Files, 10, is a student at St. Catherine of Siena Catholic School in Port Arthur and is known for his artistic ability and strong faith.

Files started drawing at age 2, he said, and has continued through the years. He likes drawing anime, such as the ones from the Naruto series, as well as other random topics. Examples of his work include a detailed Mandalorian character, a still life of a vase with rose and a tropical-like drawing.

“I like to draw after school, when I’m bored or if I have free time during the day,” Files said.

His favorite subjects at school are science, physical education and religion. 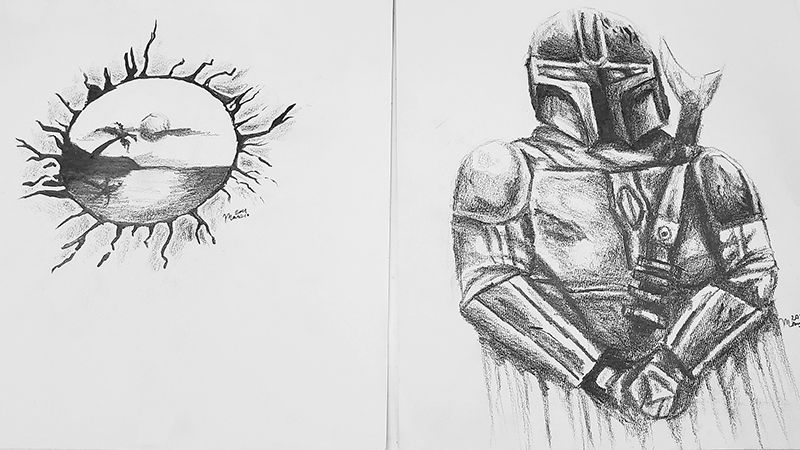 A close-up of some of his artwork. (Mary Meaux/The News)

Danielle Files said her son started off by drawing pumpkins, jack-o-lanterns and Ninja Turtles, then morphed into just about everything.

“He used to draw pew art at church and put it in the offering basket,” Danielle Files said. “The people sitting around us would be amazed and often distracted in church watching him draw. I watch him sometimes and it is truly amazing.”

The proud mother had a hard time finding some of his artwork to show — he usually gives it away to friends and even strangers, she said of looking for examples of his art to send with him for an interview with Port Arthur Newsmedia.

Danielle Files said her son sees details that others don’t see and has a unique perceptive when he draws.

But there is much more to Files than his drawing. 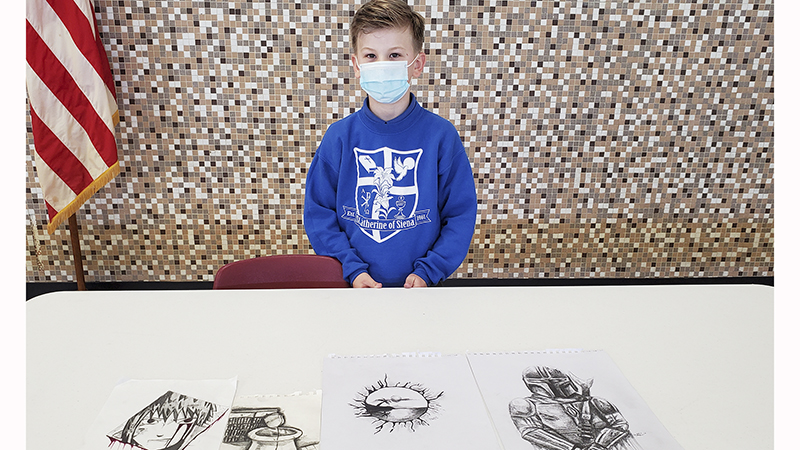 Marcus Files, a fourth grade student at St. Catherine of Siena Catholic School, poses with some of is artwork. (Mary Meaux/The News)

“He is good at so many things,” she said. “He is athletic. He is my faith-filled prayer warrior. He never stops praying. He does not need reminders. He prays at every meal even when the rest of us don’t. He prays when he hears an ambulance, sees a car wreck or when I tell him daddy is having a rough day.

“He acknowledges people. He just notices folks and makes small conversations that I feel make others feel good. He is a black belt but has never been a bully. He is almost always the smallest on any team, class or group he is involved in but he works hard, hustles and puts his heart into whatever he does.”

Others around him see how special he is.

“Marcus is a wonderful example of being Jesus’ servant, something we should all be striving for,” school librarian Donna Bihm said. “He is kind, considerate and always willing to help anyone at school. I asked him what he wanted to be when he grew up and he said maybe a priest or a dirt bike rider. 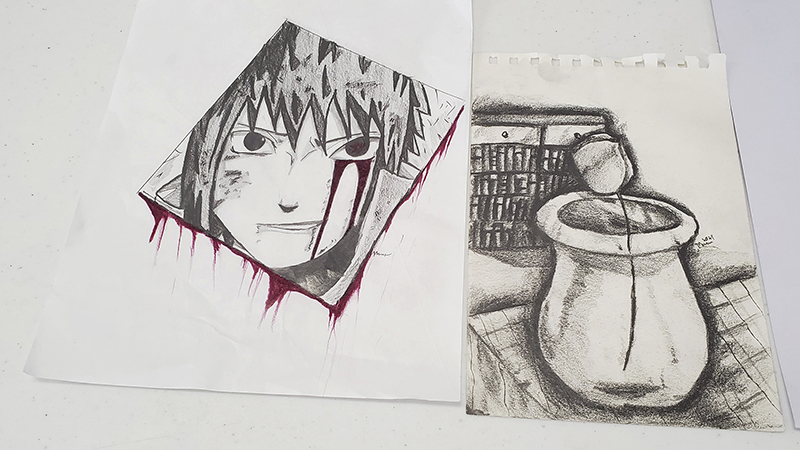 A close-up of some of his artwork. (Mary Meaux/The News)

“I asked him what his favorite day would be. He said playing baseball all day and at the end of day playing games with his family.”

Bihm said Files is a role model to his classmates, school, teachers and siblings and is an amazing young man.

Principal Renee Tolin has enjoyed getting to know Files, saying what really impresses her is his faith and love of the sacraments.

“Once I was walking in the hall with Father Rodel (Faller), and Marcus saw us. He politely asked Father if he would have time to hear his confession,” Tolin said. “Father was more than happy to oblige his request. It’s not often, even in a Catholic school, that a student asks for the sacrament of reconciliation.”