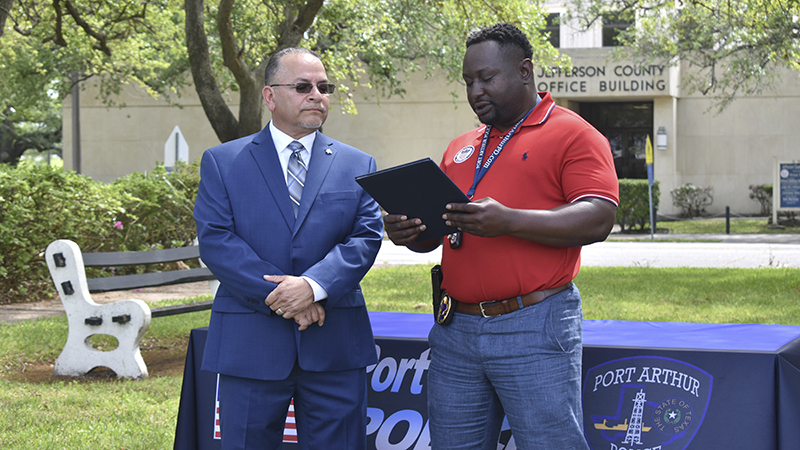 Longtime officer Paul Arvizo is beginning a new chapter in his career.

His next move is to work as an investigator with the Jefferson County District Attorney’s Office. 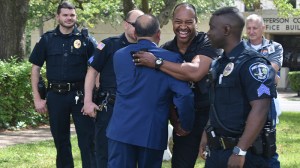 A retirement ceremony was held beneath the shade of the trees near the parking lot for the county subcourthouse. Deputy Chief Jeremy Houston spoke of Arvizo’s career:

In addition, Arvizo has been the recipient of numerous Letters of Commendation and two Unit Citations during his career with the PAPD.

Arvizo said this has been a very rewarding career for him.

“And I used to think after 34 and eight months I didn’t have anything left in the tank, but I still believe I do,” Arvizo said to friends, family and co-workers: “I made a lot of friends here and I have no intentions on letting those friendships go away. So, you’ll probably see me or hear from me. Or if anybody needs anything, give me a call.” 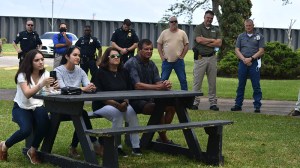 Laura Arvizo, Paul’s wife, chuckled a bit as she said he has been a bit more relaxed at home without having to type up reports.

The new position at the DA’s office is something her husband has wanted to do as a retirement job.

Cheryl Cormier, Arvizo’s mother-in-law, said she is very proud of the accomplishments of his career and called him a remarkable person.

Gabriella Arvizo, his daughter, is “super proud” of him. 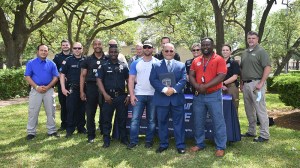 “He has always been an inspiration in his job and everything he has accomplished,” Gabriella Arvizo said. “He’s done this all of my life.”

Carol Branham, Arvizo’s sister, said her brother is looking forward to this chapter of his life and has enjoyed working for the PAPD for many years.

Arvizo has been part of a number of high profile cases and was part of a group of detectives that worked for years to solve the May 14, 2010, shooting death of Allison Neal Clark of Port Acres.

In April 2017, Clark’s killer, Sabino Orlando Martinez, was convicted for federal violations related to the killing.