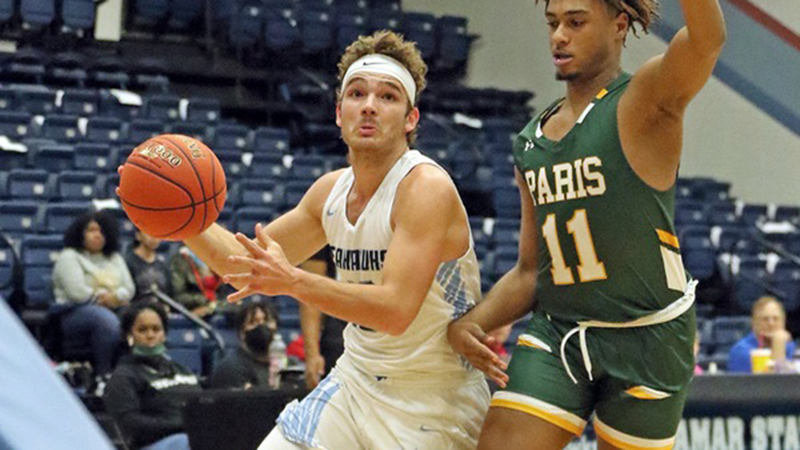 Seahawk sophomore Tydan Archibald, left, set a school record with nine 3-pointers (on 9 of 15 shooting) and 30 points in Lamar State College Port Arthur's 81-75 loss to top-seed Trinity Valley College in the second round of the Region 14 Tournament Thursday in Jacksonville, Texas.

Midway to setting a school record with nine 3-point shots in Thursday’s Region 14 tournament quarterfinal game, Lamar State College Port Arthur sophomore Tydan Archibald put up a shot from the sideline in front of the Trinity Valley College bench that set off some yapping.

“Their bench said, ‘That’s off!’” Archibald recalled, “so I turned around and said, ‘That’s money!’ and kind of stared them down.”

The shots fell — nine treys from Archibald, six from Kanntrell Burney and another by Adrian Caldwell II — as the No. 9-seeded Seahawks gave Archibald’s old team, the tournament’s No. 1 seed and this year the No. 8-nationally ranked JUCO squad, one of its toughest games all season before yielding 81-75.

Trinity Valley College, 21-1 with all the wins in a row, takes on fellow semifinalist and fifth-seed Paris Junior College (12-12), a 79-68 upset winner Thursday over fourth-seed Panola College (14-7), at 6 p.m. today (April 9) at the Alexander Gym in Jacksonville, Texas, site of the tourney. The other two teams remaining alive are No. 2 seed Navarro College (16-5) and No. 3 seed Kilgore College (16-5).

The Seahawks’ season ended with an 8-15 record.

Lamar State, which led most of the first half by a bucket or two, was within two points of the Cardinals, 72-70, after Li’Jon Smith made two free throws with 1:54 remaining before being eliminated in the quarterfinal round.

“I think we only shot 52 percent [9 of 17] at the free throw line and that hurt, but besides that, I thought we played a great game,” Coach Lance Madison said. “I don’t know if we could have played much better than we did.

“Trinity Valley is a good team. They finished first in the league. They’re ranked. We were right there, toe-to-toe with them. We shot the ball well [42 percent both on all field goals and 3-pointers], played tough defense. They’re much bigger than us, taller than us, they had more depth. But we hung with them and put ourselves in position where we very easily could have won the game.”

While Archibald collected 30 points in his LSCPA finale, Burney finished with 24, hitting double figures for the 20th time in the 21 games he played, 11 times 20 points or more.

Sophomore Dashawn Davis, an old teammate of Archibald, scored 29 points to lead TVCC but it was freshman Jakevion Buckley who hurt the Seahawks at the end.

Buckley, who finished with 13 points, hit a 3-pointer with 1:34 left for a five-point TVCC lead. Seahawks forward Nash Golaszewski answered with a deuce to make it 75-72.

Buckley’s pass set up a layup by Anderson Mirambeaux, the Cards’ incredibly athletic 300-pounder, and next, Golaszewski appeared to take a charge. Instead, Buckley was awarded two free throws, which he made for a 79-72 lead with 22 seconds left.

“I think we came out with a good game plan,” Archibald said. “We executed pretty well. We just turned the ball over a couple of times in the end and they made a couple of good plays.

“They had a player we didn’t expect to step up, Buckley, that ended up winning them the game.”

Burney, Region 14’s 3-point leader by volume, ended the game by hitting his 96th and final 3-pointer of the COVID-abbreviated season.

Archibald, while matching his season — and JUCO career-high of 30 points, broke the LSCPA single record of eight 3-pointers in a game set by Charles “Tre” Bennett in 2014 and matched twice this season.

Burney sank eight 3-balls in an upset pounding of then unbeaten and nationally ranked Blinn College Feb. 6. Archibald matched the eight 3-pointers in a win at Tyler Junior College March 27.

Joe Lucien was the third-highest scoring Seahawk Thursday with six points to go with seven rebounds. He only played half the game because of early foul trouble. Adrian Caldwell II and Golaszewski finished with five points each.

Kenyawn Bowie pulled down a team-high eight rebounds but failed to light the scoreboard.