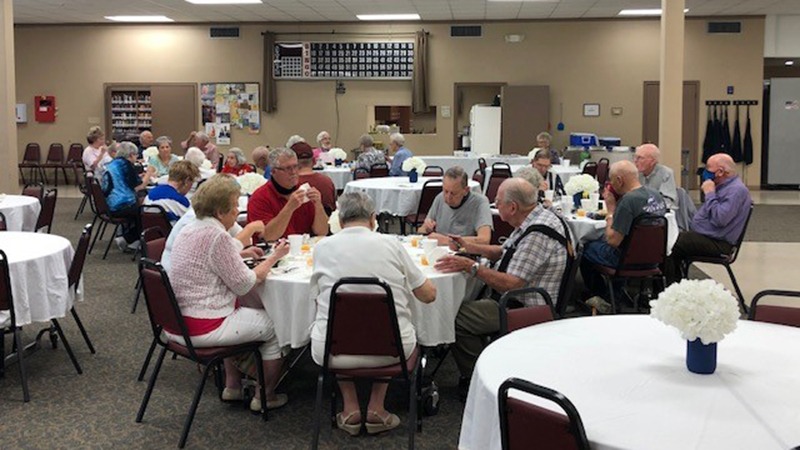 Visitors at the Port Neches Senior Center eat on the first day of reopening. (Courtesy photo)

Senior citizens in Port Neches are rejoicing at the fact the Senior Center has reopened.

The doors to the facility, 1006 Port Neches Ave., closed approximately a year ago due to COVID-19. When Texas Gov. Greg Abbott recent opened the state, city leaders decided to open its doors once again.

“When we opened they (seniors) were all so excited to come back. Very, very excited,” director Sharon Lemoine said of the Monday reopening.

Lemoine said she has had her COVID vaccine shots and several of the seniors who visit the center have, too.

“We felt comfortable opening,” she said. “We still have signs posted recommending wearing masks when you are up and walking around and social distancing. It’s up to the seniors to make those decisions.” 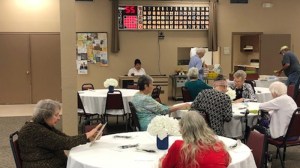 Lemoine said while the inside of the facility was closed, there was still activity going on. There have been drive-by events where patrons would come by and pick up a meal, and holiday parties where musical entertainment was set up on the sidewalk as vehicles drove by. There the seniors could get some coffee, refreshments and cookies as well as a gift and goodie bags. Some, Lemoine said, would stop in their car to listen to the music a bit then move along.

The lack of social interaction has taken its toll on some of the seniors.

“I have seen some of my seniors go down since we closed,” she said. “Social activity is really important to their mental health. We have to consider that too. They were so ready for it to open. For months they’d been saying ‘when are you going to open? I miss my friends. I need to talk to somebody.’ Even with the ones with spouses, they said they needed to get out.”

Normal activities are resuming. Lemoine is getting in contact with individuals who can be their guest speakers, crafts will be offered once a month, group dominos are ongoing and bingo has resumed.

“I’m glad to see them back. It’s so good to hear them laughing and see their smiles. It’s a big pick-me-up for them,” she said.

Some of the seniors who have struggled most include those on the verge of dementia or Alzheimer’s.

“They are the ones that activity and social networking is important to,” Lemoine said. “It helps them keep going even more.”