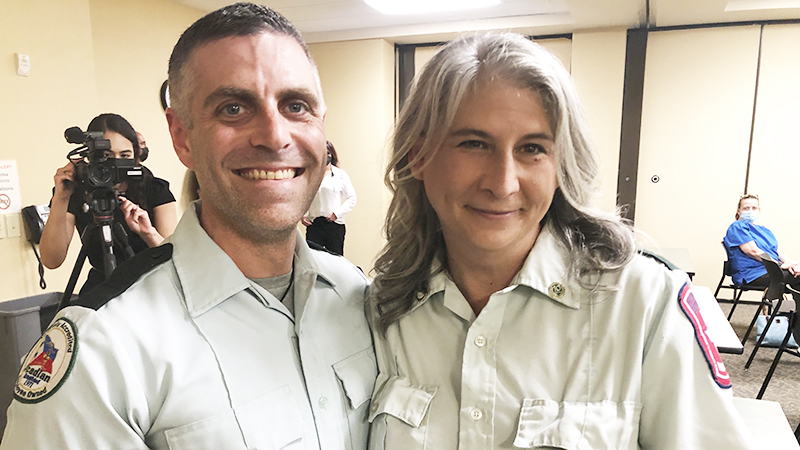 Paramedic Heather Waites and EMT Ryan Wilkenfeld have one motto: Make it happen.

“We don’t care; we’ll do what we need to make it happen,” Wilkenfeld said Wednesday during a reception at The Medical Center of Southeast Texas, where he and Waites were presented with “Distinguished Service” awards following actions made during the February freeze.

It was the first time in 14 years Acadian Ambulance Service has presented the award.

On Feb. 17 at 2:55 p.m., the two were en route to the Medical Center of Southeast Texas with an emergency patient when a vehicle passed the ambulance, lost control and flipped on U.S. 69, about two miles from the hospital.

The vehicle landed upside-down in the median filled with freezing water. There were five visible victims.

“Heather and Ryan immediately sprang into action and entered the icy waters, beginning to break the windows and beginning extricating and rescuing the victims of this accident,” said Cal Bynum, quality improvement coordinator for Acadian.

“At which time when they thought they had all of them out of the vehicle, one asked, ‘Where’s my baby?’”

Waites and Wilkenfeld returned to the water, where they found the one-month-old child.

“That one-month-old child was not breathing and did not have a pulse,” Bynum said. “They immediately began what they were trained to do and began resuscitation.”

The EMTs were able to restart the infant’s heart, and the child resumed breathing.

It was then they had to decide whether or not to wait for an additional unit or bring seven patients in one ambulance to the hospital.

“We got everyone in,” Wilkenfeld recalled. “They were almost hypothermic and in shock. Once we bundled them up, we just framed them in. I told them to hang on, we’re moving. The baby is breathing. It’s time to go.”

Waites has checked in on the family since the wreck, and they’re said to be doing great. They were supposed to be in attendance for Wednesday’s reception but were unable to make it.

Wilkenfeld has been with the company for almost three years, and Waites more than 10. 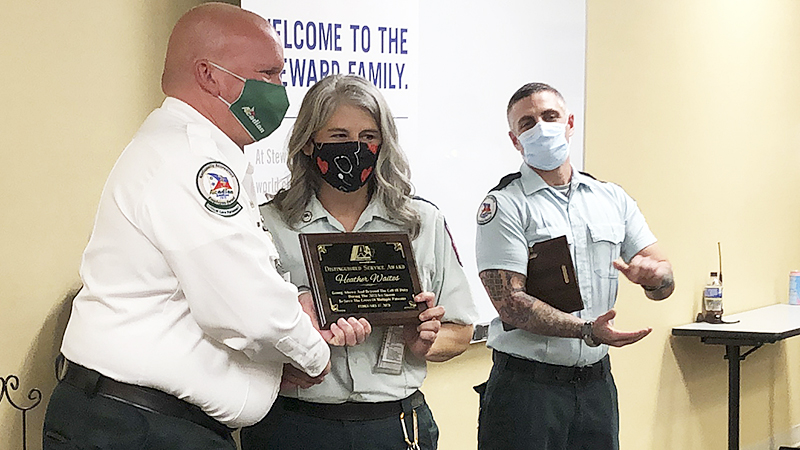 Paramedic Heather Waites receives a “Distinguished Service” award Wednesday. She and her partner EMT Ryan Wilkenfeld are the first to receive the recognition from Acadian Ambulance Service in 14 years. (Monique Batson/The News)