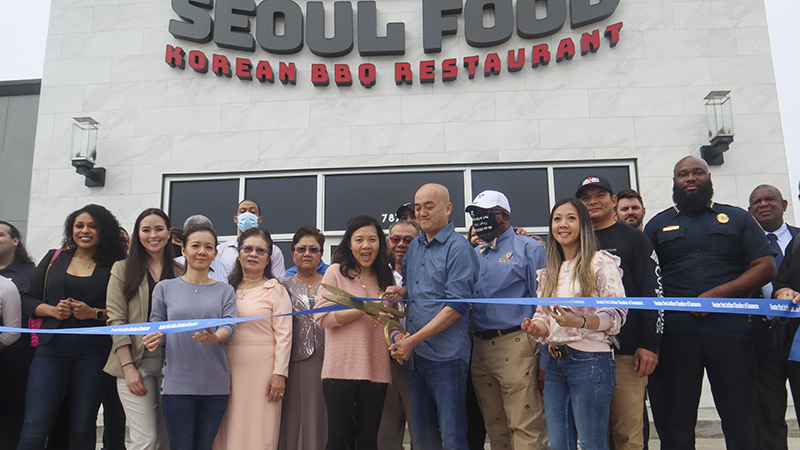 The owners, along with members of the community, held a ribbon cutting to celebrate the grand opening.

Port Arthur Mayor Bill Bartie said he is happy the restaurant is on the “Port Arthur” side of U.S. 69.

“We are excited that they are making an investment in the city of Port Arthur,” he said. “We hope that God blesses them that this will be a very lucrative experience for everyone. I was here on Friday and had an exquisite dinning experience. If you haven’t been here, come on by.”

The eatery’s owner, Tony Nguyen, also owns Reel Cajun Seafood Restaurant and Bar. He said he is happy to have Seoul Food up and running.

The establishment was originally supposed to open in November but was delayed due to the pandemic, hurricanes and a freeze.

“My wife and I grew up here and we are one of the true meanings of ‘Eat local. Shop local,’” Nguyen said. “It is such a relief (to open the restaurant). It has been a long time coming. To say that I can get some rest now is not really true, but this is the better side of not getting rest.”

George Davis, deputy director for the Port Arthur Economic Development Corporation, said he is happy to continue and expand their corporation’s relationship with Nguyen.

“We did a deal with Reel Cajun and we helped with the infrastructure here,” Davis said. “We are happy they are here and wish them the best.”

Nguyen said he is excited to share Seoul Food with the community.

The Korean BBQ joint is said to be the first of its kind within a 100-mile radius. The next closet is located in Houston.

Korean barbecue refers to the popular method of grilling meat, usually beef, pork or chicken, on a personal gas or charcoal grill built into the dining table.

Nguyen previously told Port Arthur Newsmedia he is hoping the inside atmosphere provides an energetic, fun place for people to hang out, eat and have a good time.

See where & for how much you can purchase…