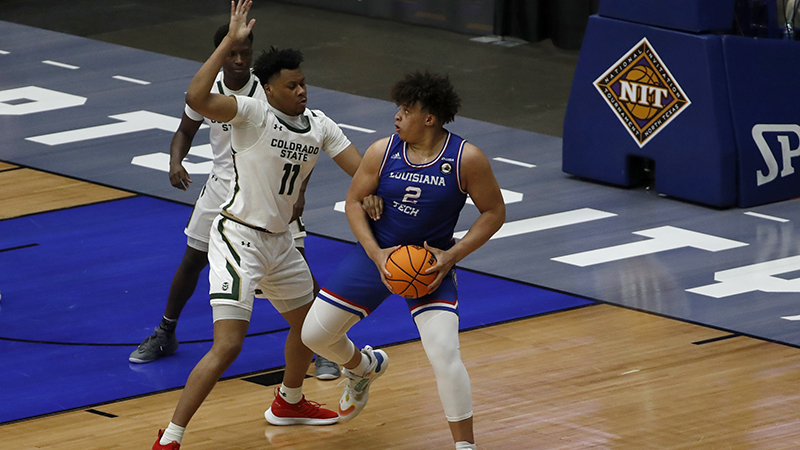 Lofton posts up a defender during the NIT basketball tournament March 28, 2021. (Roger Steinman)

March Madness used to be something everyone watched.

The drama of watching a buzzer beater, rooting for a “Cinderella” team, watching the top prospects perform on the big stage and staring off into the distance as your bracket went up in flames became the country’s unifying experience.

That didn’t quite apply to the Port Arthur region. PA had a team and a player to root for. That team was Louisiana Tech and the player was Memorial graduate and freshman Bulldogs sensation Kenneth Lofton Jr.

He provided plenty of madness.

After absolutely dominating the regular season Conference USA freshman of the week awards, he was named the conference’s freshman of the year. For the season, Lofton averaged 12 points, 7.5 rebounds, 1.5 assists and shot 56.7 percent from the field, but those stats do not show his progress. Over his last four games in the NIT Tournament, the freshman averaged 17.5 points, 7.8 rebounds.

The Bulldogs lost in the semi-final 84-62 to Mississippi State. Lofton had 20 points, 13 boards, three assists and four steals in the game.

La. Tech’s final game of the season was a consolation match against Colorado State and was likely the Memorial grad’s greatest performance and moment.

With less than 10 seconds in the game tied at 74-74, Bulldogs coach Eric Konkol called Lofton’s number for the win. After the inbound, the ball was given to the freshman at the elbow with four seconds remaining.

After muscling his way through a defender, the freshman showed off the finesse and touch to split the defense and finish at the rim with his left hand with .4 left on the clock.

Two games prior, the big man, stole a pass before going coast to coast for a game-sealing dunk.

Lofton provided Bulldogs fans and Southeast Texans with something the tournament has been lacking for years.

It was exciting to watch him develop over the year from just another talented freshman trying to feel his way through the college ranks, to a go-to option in a winning-time situation.

All of the things we love about college basketball were present with that team, that player and their run. It is unfortunate that it is over, but we are thankful for it. Now, we get the pleasure of watching what happens next for Lofton, who has set the bar high.

As he develops a stronger outside shooting game, we will no longer have discussions about how he has matured as a college basketball player. Those conversations will be had in NBA executive offices if they are not already taking place.