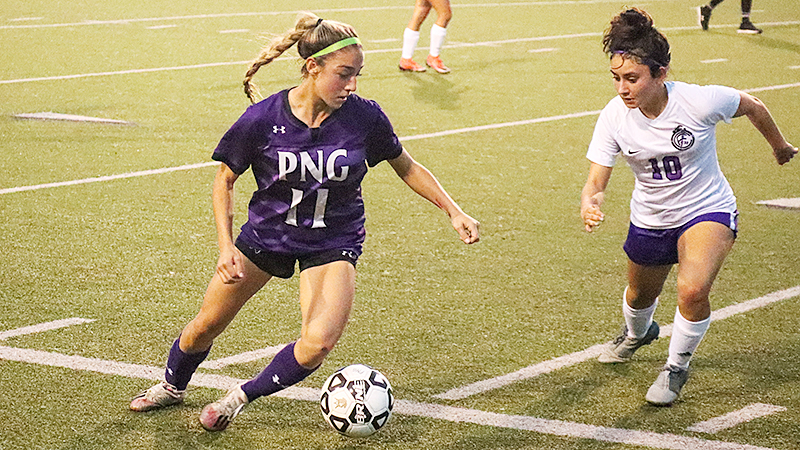 Marlee Sonnier tries to get past a defender during the first half of PNG’s 2-1 win over Fulshear in the second round of the 5A playoffs Tuesday. (Chris Moore/The News)

PORT NECHES — Two second half goals lifted the Port Neches-Groves Indians past Houston Fulshear 2-1 in the second round of the 5A soccer playoffs at PNG High School Tuesday.

While the Indians dominated the time of possession in the first half, PNG and Fulshear went into halftime 0-0 after a few attempts just missed their mark for the home team.

With the score still tied, freshman goalkeeper Emerey Riley came up with two huge deflections in the 19th and 16th minute of the second half.

With 13 minutes left to play, PNG got on the board when Abby Reeves volleyed the ball, which was saved by the goalkeeper, but Reeves stuck with the play and scored off the rebound.

Minutes later, Rylee Miller found Grace Richard on a corner kick on the backside of the post for PNG’s second goal of the night.

Fulshear added its lone goal with three minutes left in the match.

PNG advances to the third round to play Friendswood.