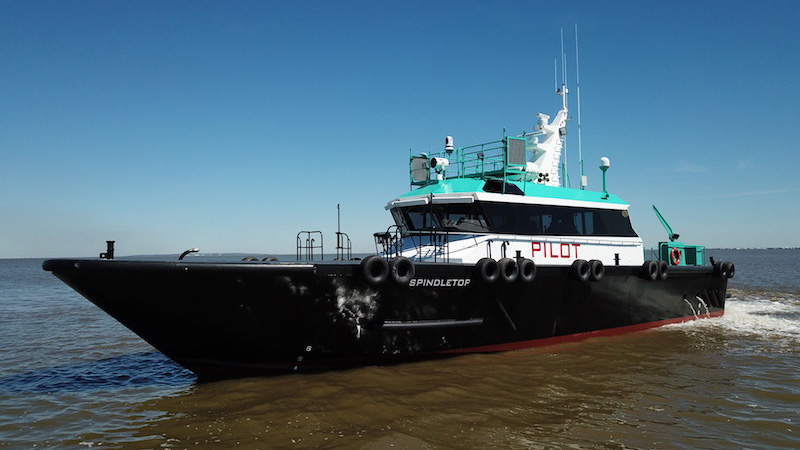 The Spindletop is the largest all-aluminum pilot boat in the U.S. It was built in Louisiana and delivered to Sabine Pilots. (Courtesy photo)

The saying is everything’s bigger in Texas — even if it comes by way of Loreauville, Louisiana.

Breaux’s Bay Craft in Loreauville was credited with creating the largest all-aluminum pilot boat in the U.S., building a 90-feet by 23-feet-by 12-feet-4-inch vessel called the “Spindletop.”

Breaux’s Bay Craft delivered the Spindletop on March 6 to the Sabine Pilots in Port Arthur.

Sabine Pilots serves the ports of Orange, Port Arthur and Beaumont, as well as much more.

Breaux’s Bay Craft Roy Breaux said the Spindletop boat was a huge accomplishment for his business.

“This is the biggest all-aluminum pilot boat built in the U.S.,” Breaux told workboat.com. “There are bigger ones in other parts of the world, but this is the largest in the U.S.”

Located in the heart of the Teche Area, Breaux’s Bay Craft was originally a towboat builder but switched to crew boats when the offshore industry got going in the 1960s. The locally-owned shop specializes in creating aluminum pilot boats, which serve many features.

Its main job is to transport maritime pilots between land and the inbound or outbound ships that they are piloting. A pilot is a mariner who maneuvers ships through dangerous or congested waters, such as harbors or river mouths.

As the oil and gas industry struggled this last year as well as the COVID-19 pandemic, Breaux’s Bay Craft jumped at the opportunity to help create a working ship for crews to use in the future.

Aside from the new platforms, the Spindletop comes equipped with new safety features that make it state-of-the-art.

Rescue assist equipment includes a SeaLift custom-built rescue platform on the transom with a 24V hydraulic unit and a transom jib pole with a 120V electric winch, according to Work Boat.com

Overall, Breaux said that the Spindletop has performed as well as he could have imagined when he first sent it to Texas.

“The boat ran six pilots out in its first hour of operation,” Breaux said.