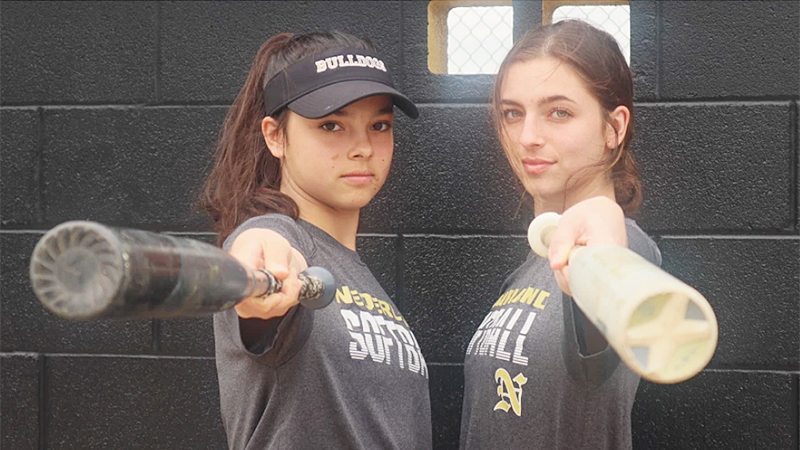 NEDERLAND — Nederland head coach Will Mallette likes for his teams to feel like family, which is particularly easy since several players are related.

“It is pretty neat,” he said. “Through JV and varsity, I think we have five or six sets of sisters now on the team. It is cool seeing that. A lot of times, sisters fight, but we don’t see any of that. They are there for each other, just like teammates. I don’t know if they act like that at the house, but out here, they support each other and hold each other accountable. They are teammates out here.”

Senior Sierra Wiltz, who plays first base and is the team’s designated hitter, and her sister, Ava Wiltz, a sophomore, believe their bond is unique. The younger sister plays catcher and middle infield.

“We are super close compared to some of the other siblings that we know,” Ava said. “Me and her have a really strong relationship and share almost everything with each other. We hang out a lot.”

Sierra said the two are each other’s best friend.

“It has always been a blessing to play with my sister because she is my best friend,” Sierra said. “We have a connection on the field, especially last year when I was pitching and she was catching. It was a special thing we had going on.”

Sierra said the two grew closer as they got older.

Nederland’s Allysa Collazo and Breanna Collazo, along with a trio of stepsisters, give the team a supportive environment.

“That is what you want,” Mallette said. “You want them to be a family, where they are all sisters… Most of my kids were watching Bulldog softball when they were little. Many watched their cousins or aunts play. This is really a family atmosphere.”

Sierra said the entire team has a strong bond.

“This year especially, we have a really strong connection with our team,” she said. “Us being sisters, we get to share what it feels like to be a family.”

While they are close, when pit against each other, the competitive nature kicks in.

“We push each other because we know how far we can go,” Sierra said. “At the same time, when we aren’t on the same team, we are each others’ biggest fan.”

The sisters have a 27-year-old brother, but they agree Ava is the most competitive.

“I am probably right behind her,” Sierra said. “If it is between me and anyone else, I am more chill and laid back, but if it is against (Ava), I make it a competition. I always like to crank it up a little more. She usually gets the better of me but I will always be her number one fan.”

In a matter of months, Sierra will go off to college at Texas A&M, leaving her younger sister behind. Ava, who is almost always up for a challenge, acknowledged she might not be ready just yet to accept that outcome.

“It is going to be difficult,” she said. “I don’t know. Maybe it is time for me to figure some things out for myself.”