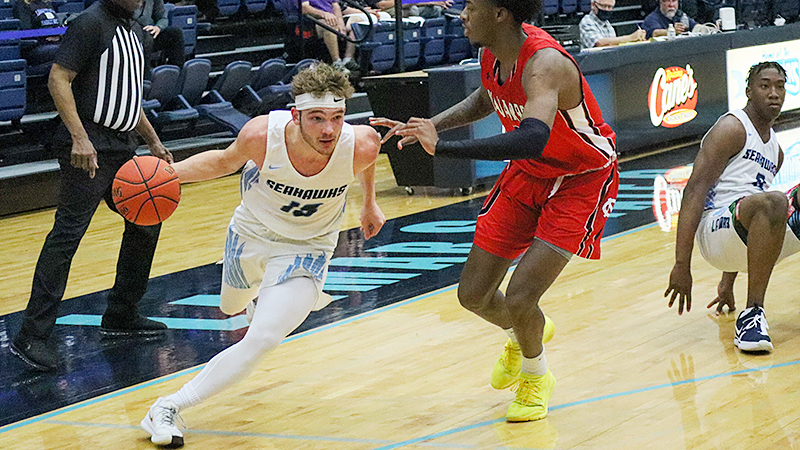 Seahawks playmaker Ty Archibald drives to the basket during the first half of LSCPA’s 79-66 loss to Navarro College at the Carl Parker Center Wednesday. (Chris Moore/The News)

A late-game surge by Lamar State College-Port Arthur came up short as the Seahawks fell 79-66 to the Navarro College Bulldogs at the Carl Parker Center Wednesday night.

The Seahawks (5-13) traded leads with the Bulldogs (12-5) throughout the second quarter, but a last-second three pointer by the Bulldogs led to a 36-29 lead going into halftime.

Navarro, which has won six straight, kept its foot on the gas in the second half, extending the lead to 19 with more than 15 minutes remaining in the game.

The Seahawks fought back to bring the score to within eight points with two minutes left, but that was as close as they would get as the Bulldogs drained numerous difficult daggers to put the game out of reach.

“We missed some easy shots in the first half,” Seahawks head coach Lance Madison said. “We kind of settled down in the second half and played better defense. They are a good team and hit some tough shots. Their size intimidated us a bit inside. We missed shots we normally hit in the paint. It was a tough game.”

The Bulldogs out rebounded the Seahawks 41-25.

Madison said he was proud of the way his team fought back after getting down early.

“We cut it down to single digits,” he said. “If we hit some free throws and hit some shots we should’ve made, we would’ve been right there.”

Kanntrell Burney led the Seahawks with 21 points, followed by sophomore Ty Archibald, who had 16.

“Ty has been a leader,” Madison said. “He brings it every night. He is a competitor. He is a good shooter. He can hit the three and he rebounds the ball. Kanntrell Bruney is shooting well. He is a good scorer. I am a little disappointed in our inside play tonight. Usually, we play a little better than that. Joe Lucien has been playing well but tonight was a so-so game but that is typical of a freshman.”

Wednesday’s game was Burney’s eighth game with more than 20 points on the season.

The Seahawks will travel to Tyler Junior College Saturday for their next game.