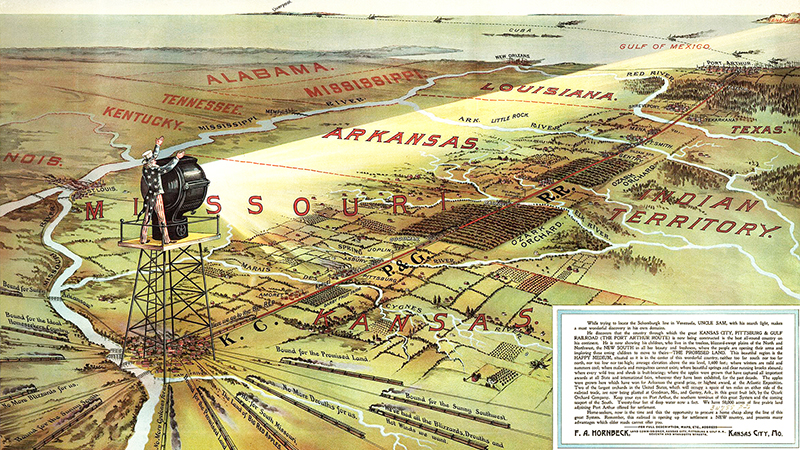 Officials with the Port of Port Arthur are optimistic about Canadian Pacific Railroad’s acquisition of Kansas City Railroad.

The merger, if approved by the U.S. Surface Transportation Board, would create the first U.S.-Mexico-Canada rail network, seemingly an extension of what Port Arthur founder Arthur Stilwell wanted in his vision of KCS.

“From a business standpoint, I think it only helps strengthen Port Arthur and the Port of Port Arthur,” said Larry Kelley, director and CEO of the Port.

The acquisition, or merger, doesn’t overlap but adds to the railroad’s reach. Where KCS ends in the Chicago area, the new rail picks up and brings it north, as well as to the west/Vancouver area and to the east/New York and St. John in Canada.

The path is doable now with help of a middle line company but with the merger the travel path can be doable with the one rail line.

Tom Neal, director of the Museum of the Gulf Coast, provided a historical look at the importance of the railway to the city’s development, saying Stilwell was a man who had a lot of hunches and lot of dreams. He was so successful at having hunches and dreams that when he had them money would follow.

An example would be Procter Street in Port Arthur. The street was named for Col. William C. Procter, of the firm Procter & Gamble. Procter was a friend of Arthur Stilwell in the earlier days of the city. He also was a stockholder in the Port Arthur Townsite Company, according to information from the museum.

Stilwell had a vision to move goods and services from Kansas City to the coast, where the items would go to a ship and be available on the world market.

Instead of an east-west line of travel, Stilwell wanted north to south.

Stilwell was a spiritualist who believed in “brownies” — kind of like a fairy. These brownies would talk to him and give him signals and signaled to him against ending the rail line in Galveston because a big storm would come and many would perish, Neal said.

Port Arthur became the end destination as it was 15 miles from the Gulf and had a protected waterway.

“It’s one thing to have a deep-water port and barge and road access, but you have to have rail if you’re going to make it all work,” Kelley said, adding he sees continued growth and opportunity.

Canadian Pacific Railway Limited and Kansas City Southern announced over the weekend they entered into a merger agreement, under which CP has agreed to acquire KCS in a stock and cash transaction representing an enterprise value of approximately $29 billion, which includes the assumption of $3.8 billion of outstanding KCS debt.

Following the closing into a voting trust, common shareholders of KCS would receive 0.489 of a CP share and $90 in cash for each KCS common share held.

Following final approval from the Surface Transportation Board (“STB”), the transaction will combine the two railroads to create the first rail network connecting the U.S., Mexico, and Canada.

Joining seamlessly in Kansas City, Mo., in America’s heartland, CP and KCS together will connect customers via single-network transportation offerings between points on CP’s system throughout Canada, the U.S. Midwest, and the U.S. Northeast and points on KCS’ system throughout Mexico and the South Central U.S.

The transaction is also expected to create jobs across the combined network. Additionally, efficiency and service improvements are expected to achieve meaningful environmental benefits.

Sinking of Texaco Oklahoma 50 years ago, deaths of…