Sinking of Texaco Oklahoma 50 years ago, deaths of 31 remembered in Port Arthur ceremony 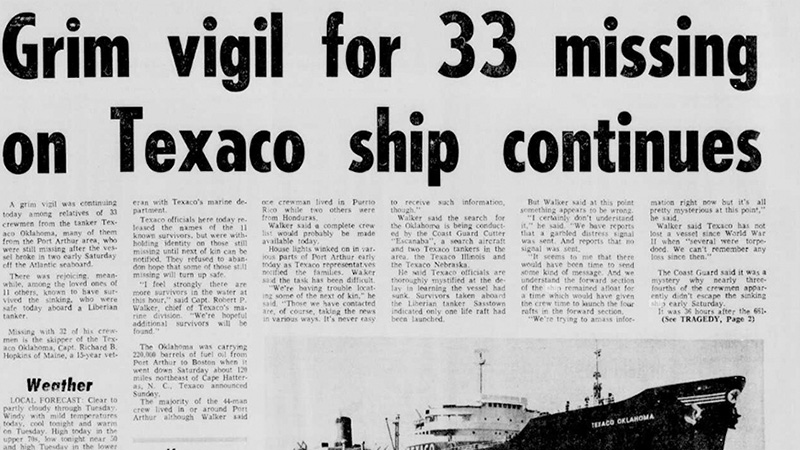 A screenshot of the March 27, 1971, edition of The Port Arthur News chronicling the sinking of the Texaco Oklahoma.

Fifty years have passed since the Texaco Oklahoma split in two and sank off the eastern seaboard, taking with it 13 Port Arthur residents along with other victims from across the U.S.

At noon Thursday, the victims and survivors who have since died will be remembered by the Port Arthur International Seafarers’ Center in a ceremony held through GoToMeeting.

“On that fateful day, the TS TEXACO OKLAHOMA, broke in two, and sank 120 miles northeast of Cape Hatteras, North Carolina. The ship was en route from Port Arthur to Boston. But not only had she sailed from Port Arthur, Port Arthur was her home and the home of many of those onboard. She was part of the proud Texaco fleet,” according to information from the Seafarers’ Center.

Thursday’s vigil includes an Ecumenical Prayer Service and will share some articles published by The Port Arthur News in 1971, he said.

According to historical records from the National Transportation Safety Board, the Texaco Oklahoma was traveling at a very slow speed in a severe storm when the incident occurred. She was fully loaded with a cargo of black oil.

The ship split in the vicinity of No. 5 tanks and submerged all of the crew asleep in the forward deckhouse. The forward section then reversed direction and drifted down onto the stern section, destroying the starboard lifeboat before the stern section was backed safely away.

None of the 13 crewmembers in the forward section survived.

The crewmembers in the stern section attempted to attract passing ships by firing flares, blinking white and red lights and sounding the ship’s whistle. One ship responded to the light signals but no distress signals were identified and the responding ship departed. 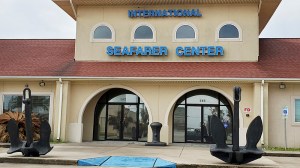 The Port Arthur International Seafarers’ Center will host a ceremony Thursday in remembrance of the 50th anniversary of the sinking of the Texaco Oklahoma. (Mary Meaux/The News)

The crew also operated the portable lifeboat radio transmitter for at least 12 hours without knowing the signals were not being received.

The stern section sank about 6 a.m. Sunday, March 28, which was the time the ship was scheduled to arrive in Boston and 27 hours after the ship broke in two.

Crewmembers abandoned the stern, using one 15-person inflatable raft and two rafts improvised from empty oil drums. A merchants vessel discovered the raft about 10 hours later and started an extensive rescue effort, the NTSB document stated. Subsequently two more crewmembers that had been in the water about 32 hours were rescued.

Thirty-one of the 44 crewmembers perished in this casualty.

The NTSB determined the probable cause of the hull fracture was the high stresses produced by heavy seas and other forces in the relatively lightly constructed, fully loaded ship.

There was also a failure of the lifeboat radio transmitter to broadcast a distress signal and lack of sufficient rubber lifeboats to accommodate the remaining 31 crewmembers after other lifeboats were lost in addition to other probable factors.

Safety reform was born from the sinking.

“Safety lessons learned and after-actions taken from the investigation of that disaster resulted in 200+ WWII-era ships being decommissioned, and new ship-safety measures being incorporated in the design of new vessels,” according to waymarking.com.

The Seafarers’ Center will host another vigil for another tragedy — this one being the 55th anniversary of the Gulfstag explosion and fire later this year. The ship sank in October 1967.

You can join the meeting from your computer, tablet or smartphone at global.gotomeeting.com/join/525956109.