Zaria Kennedy was 16 when she committed suicide on Valentine’s Day in 2018.

It’s been three years since Nederland High School student Zaria Kennedy took her own life. To honor her and the non-profit created in her memory, community members will join together Wednesday at the Port Arthur YMCA as Zaria’s Footsteps hosts a butterfly release. 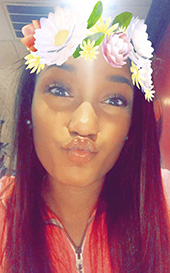 “On (March 24, 2018), the YMCA is where I did Zaria’s Circle of Grief,” said her mother, Kandice Kennedy. “I had licensed therapists there and 70 kids from different school districts. I found it very fitting to commemorate that day.”

Zaria was 16 when she committed suicide on Valentine’s Day in 2018. The outgoing teen with a spirit for giving displayed no warning signs.

“I do know for a fact that the birth control implant she had can create suicidal thoughts,” Kandice said. “She had an appointment two days later to get it taken out. All she kept saying was that she had a headache.”

Kandice describes her daughter as an old soul who loved school and lived to give to others.

At the age of 8, she created Za-Za’s Cure for Cancer and started collecting metal tabs.

“When Zaria turned them in, they gave her $10. She looked at that man and said, ‘This is not going to cure anything, sir,” her mother said while laughing. “He ended up giving her $100 just because she was so determined.”

Later she would spend her summers selling snacks to raise money to feed the homeless. She volunteered where she could. And one Christmas, instead of presents, she asked for money to make gift baskets for nursing home patients.

Her goal was to become a nurse practitioner.

“She always had it in her. She had a smile that was infectious,” Kandice said.

Less than one month after Zaria’s death, her mother created the non-profit Zaria’s Footsteps to help continue her daughter’s legacy of community service, while also serving as a suicide prevention organization.

In addition to the butterfly release, six free therapy sessions will be given out at Wednesday’s event, where Kandice will debut the 501(c)3’s new hotline number: 1-877-ZARIA16 (921-4216). She also plans to open a “Rage Room,” designed to help people take out their frustrations.

With so many losses suffered since the onset of the pandemic, Kandice said, now is a crucial time to pay attention to mental health.

“Right now everyone is experiencing some type of anxiety or depression in their life, they just may not know what it is,” she added. “Am I being the right kind of parent? Am I in the right school district? Is my career taking too much? Why didn’t I make the team? Why is my best friend not talking to me? Add the pandemic on top of it and it doubles.

“Grief comes in different levels – loss of a person, loss of payments, loss of relationships. All of these things come into play. That’s grief. That’s loss.”