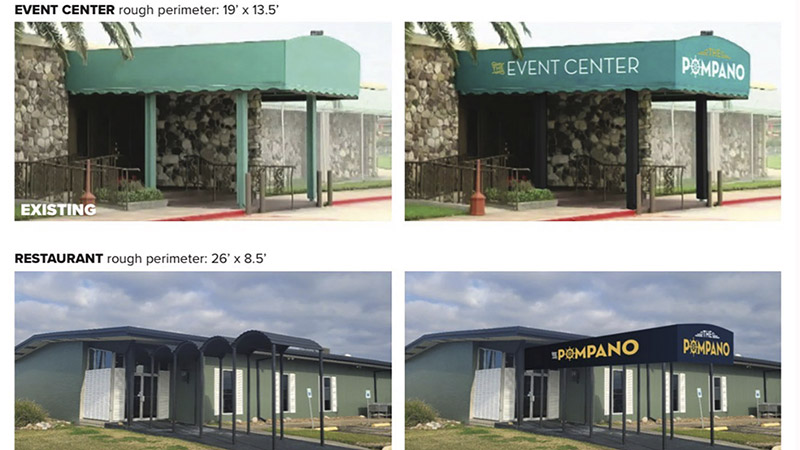 The Pompano owner Lance Bradley provided this image of what the awnings and logo of the location will look like. (Courtesy rendering)

PORT NECHES — Work on The Pompano continues as portions of the once vibrant club come to fruition.

The banquet facility, which can hold 300 people, is running and taking reservations for large events like banquets and wedding receptions, co-owner Lance Bradley said.

The banquet portion of the facility, located at 330 Twin City Highway in Port Neches, is located in the back of the building, while the restaurant sits in the front of the site.

The restaurant portion is not yet open.

“We are about to start renovation of the whole front part of the building,” Bradley said. “We hope to have that open by the first of June. We’re going to do a pretty big remodel and excited about the idea and the concept.”

Details of what customers can expect to see in the restaurant are not available, but Bradley said it would have a more modern look.

Food-wise there is Chef Chuck Harris on the job. 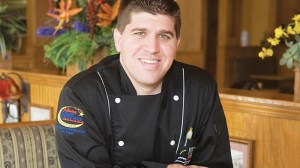 Chuck Harris, a Nederland High School graduate, has come on as chef at The Pompano. (Courtesy photo)

He has also worked food service at the Elegantè Hotel and in 2008 helped open Spindletop Steakhouse in Beaumont. In 2009 he was selected to represent the state of Texas in the Great American Seafood Cook Off that was aired on Food Network and placed in the top five.

Harris has done catering for some years and served as a private chef to the Marsh Club, a private, high-end hunting club in Louisiana.

“I’ve been feeding some of the wealthiest in the state of Louisiana,” Harris said.

The chef is also a culinary arts teacher at Nederland High School. When he hired on he had six to seven students. The program now has 60-plus students.

Harris will continue to work as an instructor with NHS and as chef at The Pompano.

“The goal is to be the absolute premier restaurant in the Golden Triangle, get it on the map,” he said.

He is passionate about sustainability and getting local products. He wants customers to know “this honey is from here,” “this olive oil is from Texas” or “the catfish is American.”

Another aspect of The Pompano is the pool.

Bradley said the pool has been resurfaced and opens in May. You can reserve your pool pass by March 31 and save 10 percent. For prices and more information on pool passes, call 409-727-3111.

There is still some landscaping to complete and the snack area will remain the same this summer with plans to upgrade down the road. Large range plans are to add a palapa.

Bradley said he has heard nothing but positive feedback about bringing The Pompano back.

Bradley has long had interest in The Pompano and spoke to Ed Hughes (former owner) previously about acquiring the property but the timing was not right for either side.

When the business closed, the group inquired about purchasing it.

The Pompano had been around for decades, hosting banquets, dinners, club meetings, special occasions and more while outside was the pool with the iconic bridge over it.

But with 2017 came Hurricane Harvey and devastating flooding. The owners at that time decided to make some changes, opening it to the public, tweaked the recipes a bit and changed the name to Benton’s, an old family name.

But last year was tough and ultimately the COVID-19 pandemic factored in on the closing after 45 years in May 2020.

When the new owners bought the business they also acquired all of the rights to the name and all of the recipes, Bradley said.

The Pompano is open to the public with the exception of the pool, which requires pool passes.