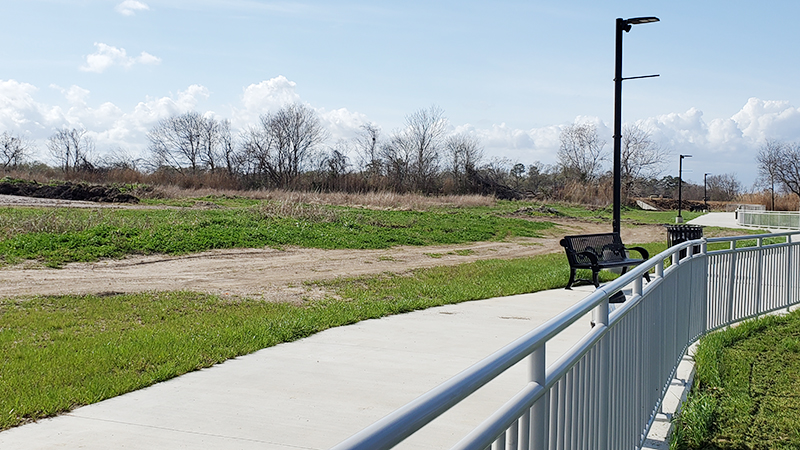 The Port Neches City Council approved a Letter of Intent from Dallon James and Austin Stone this week for approximately 8.4 acres of land along the riverfront. (Mary Meaux/The News)

The recent announcement of a food court construction project on prime real estate along the Port Neches riverfront is music to the ears of many, and is among a number of up-and-coming projects for the section of land.

Neches Point is a project led by Dallon James. The two-story establishment will feature Crown Pizza and Willy Burger, both of which James owns in Beaumont. High Society Tasting Bistoro will be on the top floor overlooking the river. And 2 acres outside will feature artificial turf so kids can play, tables for families to gather, place for a farmer’s market and an entertainment area.

The city council approved a Letter of Intent last week from James and Austin Stone for approximately 8.4 acres of land on the riverfront. The area is located along the boundary of a new subdivision under construction.

The LOI allows 180 days in order for the prospective owners to present a site plan to the city council for consideration.

There already is the very popular Neches River Wheelhouse on Lee Avenue adjacent to the boat ramp parking lot. Iguana Joe’s has announced it will build a restaurant on the riverfront. Plus, there are other plans in the works to fill out vacant spots, but officials haven’t been able to discuss them.

There’s the construction of a subdivision at the other end of Lee Avenue closer to Oak Bluff Memorial Park.

This development has been in the works for a while, tracing back to the August 2000 sale of Erickson Refining to Transglobal Solutions and the city of Port Neches’ acquisition of the former Coastal Marine property in December 2001.

These two pieces of once-industrial land make up the approximate 80 acres sought after today.

In April 2004, the city’s Construction Board of Adjustment and Appeals gave TGS a year to dismantle the deserted refining unit. TGS also was cited with several city code violations as well as fire code safety violations under the International Property Maintenance Code. And in 2005 the city bought the TGS property for $5 million.

A vision for riverfront development became an oft talked about possibility. At one point the land was cleaned to residential specifications, which is more stringent than that for commercial property.

But with 2008 came Hurricane Ike and widespread damage. By December 2009, the city decided to put development plans on hold, citing the nationwide economic downturn and Ike as reasons for lack of response to a Request For Proposals from interested developers.

Interest wasn’t rekindled until January 2011 as developers began working with the city. Then in 2013, businessman Bert Lamson approached the Port Neches Riverfront Development Authority, then the city council with the idea of the Neches River Wheelhouse. The eatery, which has several other owners, opened in 2014 and has continued to grow.

Twenty or so years of ideas, planning and starting over has produced one of the most sought after strips of land in the area.

Here’s to the continued growth and success!

PNG not taking win lightly, ready for rematch against…