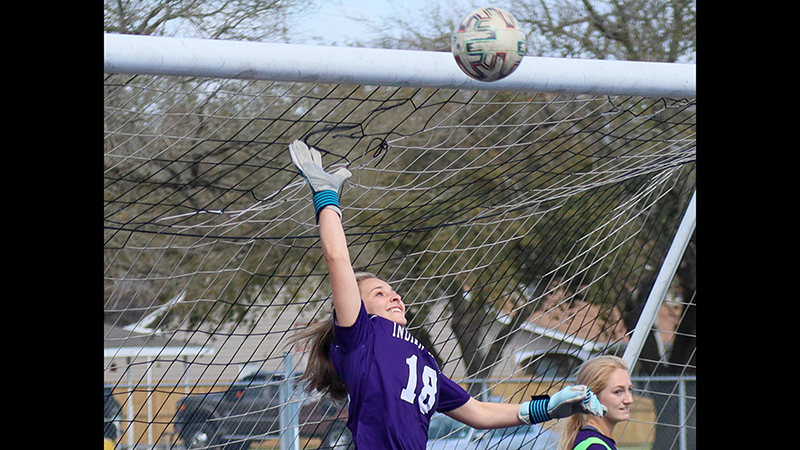 The Port Neches-Groves girls soccer team was a defensive force during the regular season, racking up 16 shutouts.

The team has allowed nine goals all season.

While the Indians’ team defense is not easy to get through, opponents have had trouble scoring against freshman goalkeeper Emerey Riley.

“She has a great attitude,” head coach Aimee Bates said. “She is a fierce competitor. She played goalkeeper a long time ago. In club, she started playing field. In talking to her at camp and seeing her around, we didn’t know what role she would fill for us this year. The team needed her to step in at goalkeeper and she did.”

Bates said Riley’s time playing all over the field helps her versatility. The freshman also played basketball and volleyball for the Indians earlier this year.

“One thing that separates Emerey from any other goalkeeper we have had is that she has a lot of field experience,” Bates said. “She is able to use her feet and is skilled. Being able to drop it to her and her being able to play with her feet gives us an added advantage. A lot of keepers in high school don’t have that skillset.”

Bates watched Riley for the past couple of years and knew she would likely play on varsity.

“I knew it would be close,” she said. “When she came out to practice and I saw her skillset, I knew she would fit in. She is definitely one of the better athletes we have had.”

While Riley is the only freshman on the team, Bates said she meshes well with the upperclassmen.

“She has come and taken the lead,” Bates said. “She provides comedic relief. She loves to crack jokes and can fall in and take what the seniors are doing without ruffling feathers.”

PNG finished the district season undefeated and ranked No. 5 in the state heading into the 5A playoffs. The Indians outscored opponents 100-9 this season.

“A lot of our shutouts, as good as she has been, our defense has been even better,” Bates said. “The team is great at limiting her looks at the goal. There are a lot of games where she didn’t have to make a lot of saves.”

Bates said the freshman’s best game was against Barbers Hill.

“She had a few games where she came up with some big-time saves,” Bates said. “Riley said her best game was against Nederland.

PNG beat Barbers Hill 1-0 to clinch the District 21-5A championship. The Indians beat Nederland in both meetings by a combined score of 7-1.

PNG is awaiting the results from this week’s matches to find out who they will play when they playoffs begin next week.