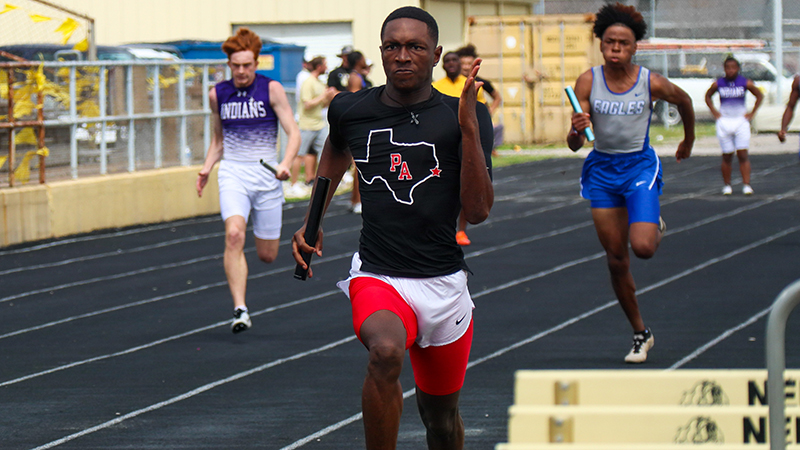 The event was originally scheduled for Feb. 12, but the historic statewide freeze forced the meet to be delayed until this week. Runners did not have to worry about freezing conditions Friday as a slight overcast and breeze kept the temperatures to a cool 75 degrees.

Memorial started the track portion of the events by sweeping the 4×100 sprints for the girls and boys. 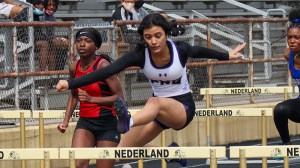 “I told them that if we get under 42 seconds, I will be happy,” he said. “I don’t know the official time, but it should be close to being under 42. I will be happy with that.”

Granger said Brown shows a lot of promise, despite his underclassman status.

“He has a lot of potential, and he just doesn’t understand it right now,” he said. “He is going to get it eventually, but we are just going to keep building and keep working.”

Granger was happy to not have to travel very far for a meet.

“I am just excited that we can be running close to home,” Granger said. “It has been a long time since we have had a track meet in this area. I was happy with the way the kids performed.”

Port Neches-Groves junior Alex Herrera won a heat in the girls 100-meter hurdles on her way to an overall third place finish. Caryss Carpenter from BC won the 100 hurdles.

Eight high schools participated in the event, which was forced to reduce the number of teams due to COVID-19 restrictions.

Memorial, along with other local teams, will participate in the PAM Relays in Port Arthur March 19.