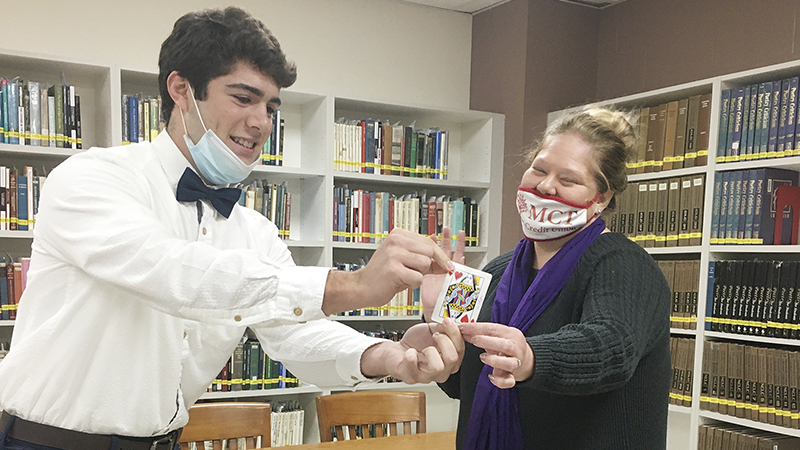 Any good catcher must be good at slight of hand. The position often requires players to turn balls into strikes by subtly move the ball over the plate without the umpire noticing.

Port Neches-Groves catcher Ryan Sosa has a bit of an upper hand when it comes to deception.

“I have a hobby,” he said. “I do magic. I do close-up magic with cards and sharpies and stuff like that. When I was 11 years old, my family and I went on a trip to Florida and I saw a magician and thought it was pretty good. I looked up some stuff on YouTube and it has gotten progressively better.”

When Sosa was 14, a teacher saw him doing magic in the class and hired him to perform at her son’s birthday party.

“It helps me being the catcher,” he said. “We have to present the ball to the umpire and it helps having quick hands and nice hands. It really comes into play back there.”

“He is a really good baseball player and leader for us,” Carter said. “We are going to go how he goes. Ryan understands the game and works really hard at what he does. He wants to play at the next level. He spends a lot of time on his craft. He is a fantastic kid that everyone thinks the world of. He is a top student. He is probably in the top 10 (of his class). He was student of the month not long ago and was accepted into A&M. I don’t know if he is going to go or try to play baseball somewhere, but he is a great kid.”

The catcher said he wants to play JUCO ball somewhere.

“I want to go to somewhere I can fit in nice,” he said. “I haven’t had any talks with any coaches yet, but hopefully that will come soon. That is my goal for this season.”

Sosa said he tries to bring solid hitting and leadership to the PNG squad.

“The whole group of seniors bring the leadership,” he said. “We have a lot of young guys so we just want to help. I hope to bring a positive attitude as well.”

The catcher’s most memorable moment with the Indians came in a 19-inning game in the second round of the playoffs his sophomore year.

They were playing Shadow Creek.

“When we hit that final hit into the outfield and scored the game winner, that was amazing,” he said. “My legs were done after that. I was happy the game was over. Most people don’t realize, but the catcher throws just as much as the pitcher. The pitcher can’t last 19 innings. That was the most sore I have been after a game.”

“We ended when we were on a five-game winning streak,” he said. “In practice we have to have a game-like mentality. We have to get those mental reps in and get the job done.”

Sosa said he wants his team to make a playoff run this year.

“We just need a little shove and push,” he said. “I want to make it far and get everyone rocking and rolling.”