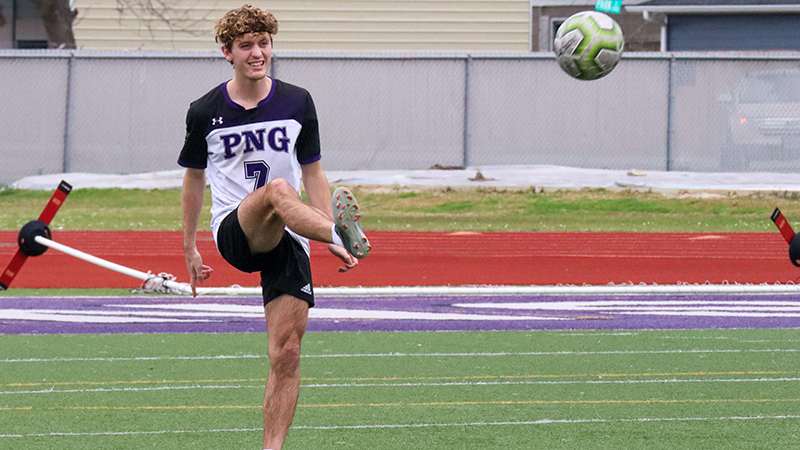 PNG's Jason Lovejoy broke the school record for most goals in a career. (Chris Moore/The News)

With the soccer playoffs on the horizon, Port Arthur and Mid-County has five teams sitting in the top four of their districts.

On the boys’ side, PNG could clinch a playoff berth with a win over Memorial today. If PNG losses, Barbers Hill would need to win its last two games (one of which is against Nederland) to take the final playoff spot from the Indians.

“We will return 10 starters next year,” Luttrull said. “(Jason) Lovejoy has been the only senior that has started all year for us. Grant Pearson has been a kid that came from football and basketball. He is the only other senior that really starts some games. It depends on the lineup. After that, it is all underclassmen, so the playoff experience would be huge.”

While he said he would like a higher seed, Luttrull is happy his team controls its own destiny.

Luttrull said playing in a tough district prepares his team for a playoff run, the Indians make it.

“To be able to play those big schools and compete is great,” he said. “You look at Nederland, and Coach Barrow has done a phenomenal job over there and they are all seniors. Us being able to compete and battle with them says a lot about our kids.”

Luttrull said the leadership Lovejoy provides has helped the young team grow. The senior has more than 100 goals scored and more than 100 assists for his high school career.

“I am still looking but I don’t know if that has ever been done in Texas high school soccer,” Luttrull said.

Last weekend, the PNG girls clinched the District 21-5A title with a 1-0 win over Barbers Hill.

The girls team will play its final game of the regular season in the next two days. PNG and Memorial close the regular seasons out against each other at 5 p.m. today in Port Arthur. The Titans are a game up on Crosby. The two teams could play a tiebreaker Tuesday if the Titans lose to PNG.