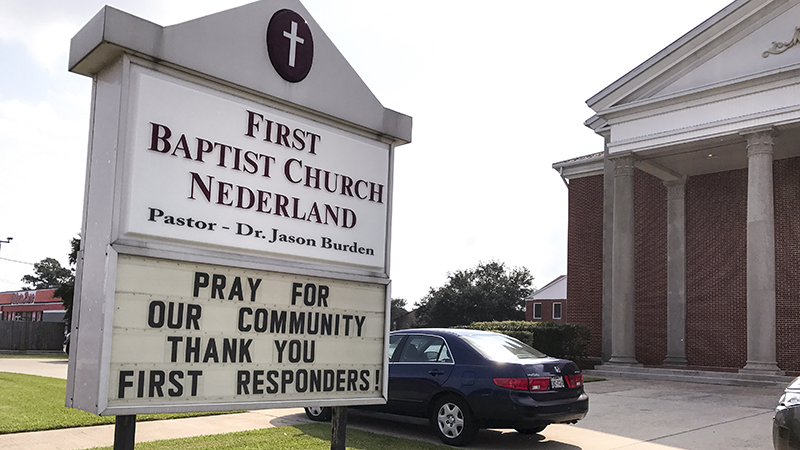 First Baptist Church Nederland held a Sunday morning worship service with members from flooded Memorial Baptist Church in Port Arthur and first responders from across the country in 2017.

While many students will spend their Spring Breaks on a beach, approximately 160 will be in Southeast Texas this week helping residents rebuild and recover from an active hurricane season that saw two named storms rock the area.

The group is called BOUNCE Student Disaster Recovery and is made up of students and sponsors from churches across the state.

“People still have significant needs resulting from these three hurricanes that have affected the Golden Triangle area, and students are ready to serve,” BOUNCE director David Scott said. “It’s been a difficult year for them in many ways, and they’re ready to get out and do something. So we’re really excited that we have these churches who are ready to mobilize and get their students out there to do some good.”

Planned workdays are Thursday and Friday, as well as March 15 and 16. According to Scott, students will be at worksites at private residences from 9 a.m. to 4 p.m. or until project completion.

While most of the cleanup will be focused in Orange County, which was the hardest hit area locally, the team will be stationed at First Baptist Church in Nederland.

Pastor Jason Burden is more than happy to partner with Bounce, because it provides a way for young people to make the world and their neighborhoods a better place.

“These are kids who come from all over the state,” Burden said. “They could be doing a million different things with their Spring Break, but they have chosen to come down here to our neck of the woods, do stuff for free that will save some homeowners a ton of money and make our community a stronger place to live. It shows a lot of maturity.”

First Baptist Church has often hosted those on mission trips, and Burden said the more work supported and encouraged, means the more work that gets done.

Burden also sees the impact it has on people in his own church.

“We’ve really been blessed,” he said. “We have people that have been so inspired that they have signed up to go wherever an urgent crisis may be. Whenever you create that kind of ecosystem of generosity, charity and love and encouragement, everybody benefits.”