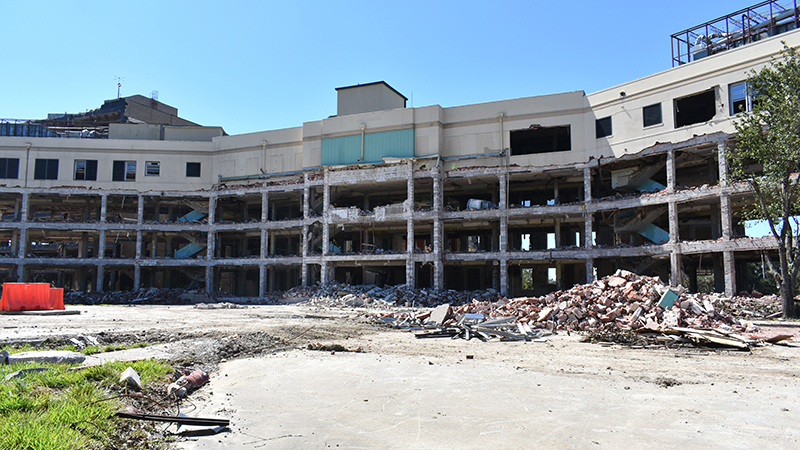 Demolition of the older portion of the hospital can be seen in September 2020 from Ninth Avenue. (Mary Meaux/The News)

Almost 91 years to the day have passed since the city of Port Arthur donated land that would hold Mary Gates Hospital, later to become St. Mary Hospital.

The hospital, which later became part of CHRISTUS Health, shut its doors in 2019 and was torn down in 2020.

On Monday, Port Arthur councilmembers approved a resolution allowing City Manager Ron Burton to execute a land donation between CHRISTUS Health Southeast Texas and the City of Port Arthur for acceptance of the property at 3535 Gates Blvd., the former site of the hospital.

The land donation wasn’t a new idea — officials early on in the process of closing the facility announced it.

And while the resolution was a bit of a formality, it was necessary so the city to do due diligence and research for any deed restrictions or other issues that may pop up.

Burton said there is talk of a possible symbolic ceremony with the city and CHRISTUS Health for when the deed officially passes hands to be held on or about March 17 — which marks the 91st year since the original deed.

Currently, the buildings have been cleared from the site, leaving approximately 27 acres of empty land.

Mayor Thurman Bartie said, for now, the property will remain as green space.

When asked how the empty land is beneficial to the city, Bartie said there could be a possibility of a facility there in the future, though this was speculation.

The doors to the hospital officially closed July 18, 2019, ending 89 years of service at the Gates Boulevard location.

On that day, the last patients were cared for with the emergency room operating up until noon.

Characterizing the hospital’s business model as unsustainable, CHRISTUS Southeast Texas Health System officials said the decision to close the 229-bed facility followed years of declining numbers for the hospital in general and for inpatient care in specific.