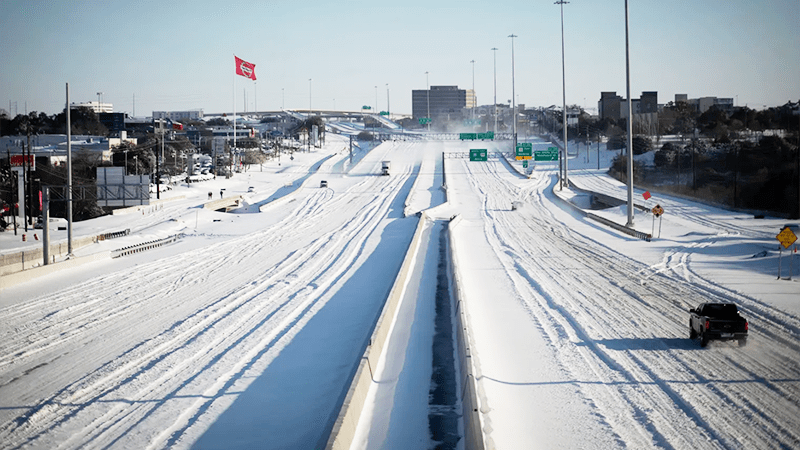 Interstate 35 near Stassney Lane in Austin was blanketed with snow on the morning of Feb. 15. A major winter storm affected the entire state of Texas. (Miguel Gutierrez Jr./The Texas Tribune)

The proposals include overhauling the governance of the state’s electric grid operator, the Electric Reliability Council of Texas; mandating “weatherization” of power facilities; and establishing a statewide disaster alert system. There is also legislation to ban variable-rate electricity pricing plans such as were offered by the company Griddy, which was recently effectively shut down in the state after customers were hit with bills in the thousands of dollars.

Phelan’s office called the proposals the “first phase” of the House’s proposed reforms in the wake of the winter storm. Not all the bills have been filed yet, so the specifics of some proposals have not yet been made public.

“We must take accountability, close critical gaps in our system and prevent these breakdowns from ever happening again,” Phelan, a Republican, said in a statement.

The package of bills comes days after marathon hearings on the crisis by House and Senate committees that left many lawmakers unsatisfied. After the hearings, the chairwoman of the Public Utility Commission, DeAnn Walker, resigned, and ERCOT CEO Bill Magness was fired.

The House’s ideas generally reflect the priorities of Gov. Greg Abbott, who has called on lawmakers to reform ERCOT and require — and fund — the winterization of the Texas power system. After the storm, he made both those proposals emergency items, meaning legislators can vote on them within the first 60 days of the session. Lt. Gov. Dan Patrick, who presides over the Senate, has also listed ERCOT reform as a top priority for the upper chamber, as well as “power grid stability.”

House Bill 10, for instance, aims to reform ERCOT by restructuring its board. The legislation would replace the board’s “unaffiliated” members with members appointed by the governor, lieutenant governor and speaker. The bill would also mandate that all board members live in Texas. And it would add a new board member to “represent consumer interests,” according to Phelan’s office.

Some other ideas could prove challenging. House Bill 11, for instance, would order the PUC to require power generators to implement measures to avoid service outages during extreme weather events, including winter storms and heat waves. But retroactively equipping power plants and the state’s energy system to withstand cold temperatures is likely to be difficult and costly, energy experts have said. Building energy infrastructure that from the start is designed to perform in winter conditions is easier and cheaper, they have said.

Phelan’s office described another bill, House Bill 14, which hasn’t yet been filed, that would require the Railroad Commission of Texas to require pipeline operators to update their equipment to ensure reliability during extreme weather. It’s unclear how much either bill would cost the state or the power generators. Abbott has indicated in the past that he is interested in funding at least some of the weatherization.

Power generation executives complained during legislative hearings on the power outages that facilities didn’t have natural gas to run. Meanwhile, natural gas production and transportation companies complained that power was cut to essential facilities — a problem State Rep. Charlie Geren, R-Fort Worth, called “a big chicken and egg.” Both sides of the supply chain avoided talking at length about winterization.

Todd Staples, president of the Texas Oil and Gas Association, in his testimony to lawmakers listed several reasons why natural gas production declined during the storm, starting with the loss of power to oilfields and ending by acknowledging the weather-related mechanical issues that “may have been avoidable or might not have been avoidable.” He and Christi Craddick, chair of the Railroad Commission, emphasized that power outages to oilfields were the main cause of the dwindling supply of natural gas during the storm — not the industry’s failures to prepare for extremely cold weather.

Three of the seven priority bills are being carried by Rep. Chris Paddie, R-Marshall, who chairs the powerful State Affairs Committee. A fourth bill is being authored by fellow GOP Rep. Craig Goldman of Fort Worth, while the remaining three are being spearheaded by Democrats: Reps. Richard Peña Raymond of Laredo, Ana Hernandez of Houston and Joe Deshotel of Beaumont.

— Reported by Patrick Svitek, Mitchell Ferman and Erin Douglas of The Texas Tribune, a nonpartisan, nonprofit media organization that informs Texans — and engages with them — about public policy, politics, government and statewide issues.