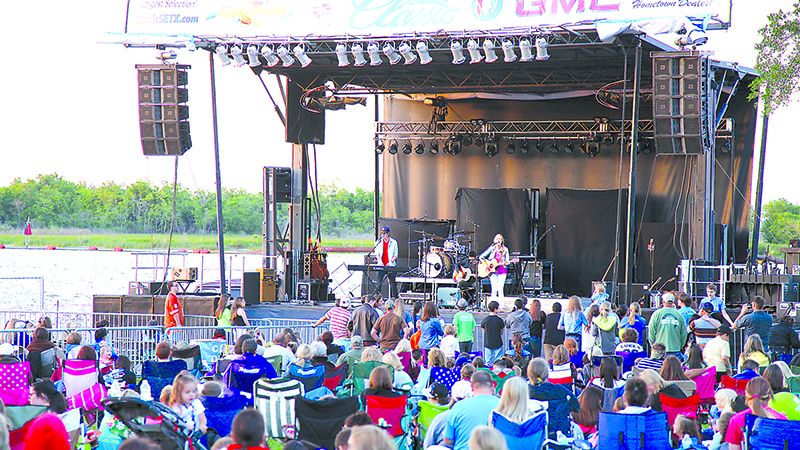 A crowd gathers for a concert in Port Neches at RiverFest. The annual event, which did not take place in 2020 due to the coronavirus, is scheduled this year from April 28-May 2. (Port Arthur News file photo)

PORT NECHES — Port Neches RiverFest will be one of the first attractions to return to Southeast Texas approximately a year after the country shut down during the coronavirus pandemic.

Organizers announced this week the festival returns April 28 – May 2 after not being held in 2020.

Like most of the local events last year, RiverFest shuttered in the wake of the worldwide shutdown.

“We had secured our entertainment. We really needed to move forward if at all possible. With everything opening up, we felt like the community is ready for something to happen, but we are still going to go by the CDC guidelines. We encourage everyone to be safe, wash hands and wear your mask if you want to.”

“First off, things are a go right now, but we are still watching everything day-by-day,” Bradley said. “Things could change. We don’t foresee that happening. We are excited, to say the least, to be able to offer the event; one of the first ones since the pandemic. It will give people a chance to get out and resume their life and give people some sort of normalcy.”

Since the planning for the event is ongoing, details are sparse, Plaia said. However, she confirmed the vendors, racing team, carnival and entertainers would be part of the festival, as well as several other mainstays that attendees are accustomed to seeing.

“At this point, they are moving forward with us,” she said. “We did the pageant last year with limited access. We are focusing on doing it the same way this year. That will happen this month. Mother of the Year will happen, as well. We always do it on that Sunday of RiverFest, which will be (May 2). We are ready to have a mother.”

The 2020 Mother of the Year was Kelly Plante, who Plaia said was a “fabulous” representative during a rough year.

Bradley said the money for RiverFest mostly goes back towards the festival, but “extra funds” go towards civic projects.

“We try to pick a project that benefits the city like the improvement of the restrooms,” he said. “We try to do some things that help the park.”

“I think it is time for us to get back to normal,” he said. “I encourage people to wear their facemasks and social distance, but I am thrilled that the RiverFest is back on in Port Neches.”

Johnson said he has no trepidation about the event being the first in the area since the shutdown.

“I’m glad we are having the event,” he said. “There is no hesitation on my part. I am just thrilled that they decided to do it.”

Plaia said she is thankful the timing worked out in RiverFest’s favor.

“We are just ready for normalcy, but we want to be safe,” she said.