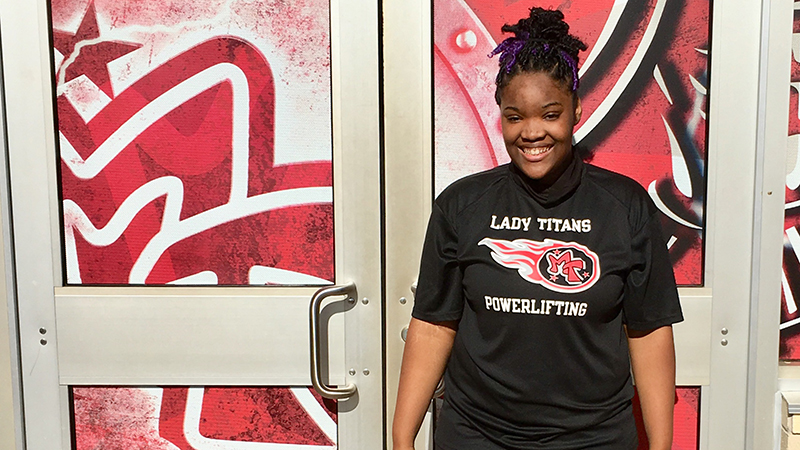 Memorial sophomore Madison Parker had not lifted any weights prior to this school year. In two weeks, Parker will compete in the state 5A competition in Corpus Christi.

“I’ve never had anyone like that,” Memorial powerlifting coach Rashad Colquitt said. “Usually girls powerlift, but it takes them a while to get used to it and do it year after year. This is her first time lifting. To make it to state, I’ve never seen it. She is a first. I am excited to have her for two more years. That is for sure.”

Her coach said Parker’s determination is what fueled the impressive season.

“When she started, her technique was really bad,” Colquitt said. “Her work ethic everyday has improved it. For her to finish second in regionals and qualify for state in her weight class is a big, big thing.”

“One day she came up and said she wanted to power lift,” Colquitt said. “I told her that she was doing too much and didn’t have time for powerlifting. It takes a lot of time and dedication for powerlifting to just go and lift weights. She worked out her schedule to where she can come and get her workouts in.”

Colquitt said Parker squatted 270 lbs., benched 125 lbs. and had a 240-pound deadlift in her last regional meet.
The road to state qualification has not been easy, her coach said.

“At first, she struggled because she had never lifted weights before,” Colquitt said. “Her dedication and her work ethic are crazy. She comes every day. She is on time. She works out. How she is able to do all of that stuff and compete at a high level her first year is just a great thing. She is also an early college student, so she has a lot on her plate.”

Colquitt said the experience of competing at the state competition as a sophomore will prove to be an invaluable experience for Parker.

“I talked to her dad yesterday and we talked about how her going and being able to see and experience it as a sophomore, she is probably one of the youngest girls that is going to compete there,” Colquitt said. “It takes some girls until their senior year to get to this level. I think this is a big accomplishment.”

The coach said Parker’s ability to thrive in one year might boost the program.

“Kids seeing her now being able to succeed in one year is going to bring out more girls next season,” he said. “There is a lot of buzz around the school right now with people congratulating and telling her how well she is doing. I think the buzz she is causing could make more girls come and powerlift next year.”