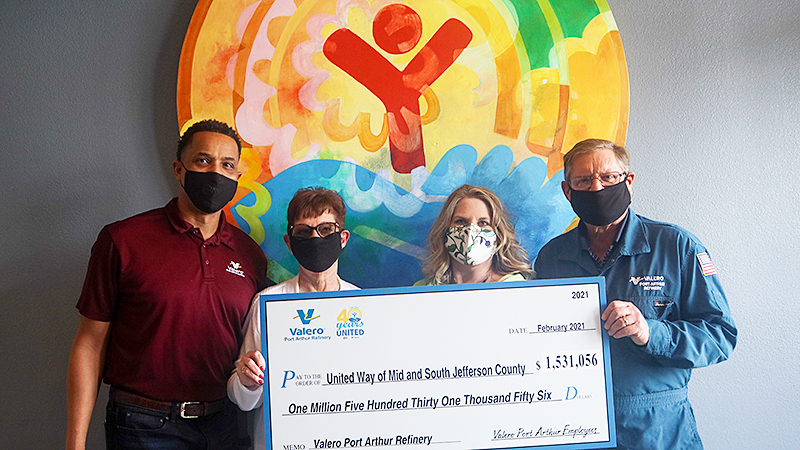 Jerome Delafosse, from left, Barbra Phillips, Janie Johnson and Mark Skobel pose at the United Way office in Port Arthur on Friday. Valero is projected to donate more than $1.5 million to the United Way in 2021. (Chris Moore/The News)

Valero Port Arthur Refinery is projected to donate more than $1.5 million to United Way this year.

The occasion was celebrated at the United Way building in Port Arthur Friday as representatives from the refinery handed over a ceremonial check for $1,531,056 as the largest projected donation in the history of the foundation.

Valero employees pledged more than $974,000 during the 2021 United Way campaign, with additional fundraising and a company match to meet the record number.

“I’m very proud of our employees and inspired by their generosity as they continue each year to provide huge financial support as well as volunteer participation, helping these agencies in meeting the needs in our community,” said Mark Skobel, vice president and general manager for Valero Port Arthur. “I’m honored to be a part of this outstanding team.”

In addition to the pledges, employees raised $35,000 for United Way from their third annual Reel United Fishing Tournament, $32,467 from a United Way Auction, where employees bid on items donated by Valero business partners and almost $1,500 from a virtual Bingo fundraiser.

“In a year that was emotional and filled with fear of the unknown, Valero employees and our local refinery once again stepped up for our residents of our community by supporting the United Way Campaign,” said Janie Johnson, CEO and executive director of the United Way of Mid and South Jefferson County said.

“It is inspiring to see and work with individuals and a corporation that truly values our local programs, resources and community and also supports them.

“The financial support the employees and company give will literally provide thousands with hope this year when they turn to the United Way programs for a helping hand.”

Johnson said the donations are not just financial and she appreciates the time spent volunteering .

“This is a culture of compassion with very special people behind the brand,” she said.