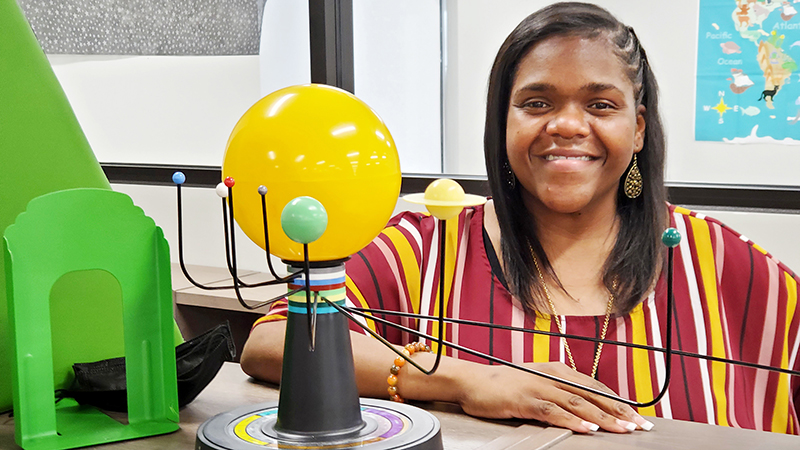 Edreauanna Fowler, a fifth grade teacher at Lakeview Elementary School, is using the wisdom instilled from her parents with her own journey to make a positive impact on others. (Mary Meaux/The News)

Walking into Port Arthur Public Library earlier this week, Edreauanna Fowler, a fifth grade teacher at Lakeview Elementary School, greeted an employee at the front desk with an ear-to-ear smile and wave.

She’s known by many in the city as an educator and as the daughter of recently passed Gladdie Fowler — a powerhouse of a woman who was a longtime educator and champion for those with mental illness.

When the elder Fowler passed away on Dec. 4 from COVID-19, her story was picked up by the New York Times and MSNBC.

Edreauanna’s own journey isn’t one of being in the shadow of her parents but one of a woman whose experiences led her on her own path while using gifts given by her parents.

Passing on positive messages to those she encounters is important.

“Some of the things I want to give others is to let others know that whatever you’re going through in life, you can make it,” Edreauanna  said.

While growing up she had 10 sinus and head surgeries at Texas Children’s Hospital in Houston.

At the age of 5 she contracted a disease called periorbital cellulitis, stemming from a sinus infection and pressure so great it reached the base of her spine and was causing her eyes to bulge out of the sockets. She was taken by medical helicopter to the Houston hospital, and her parents were told that if she lived she would be brain damaged, blind and never walk or talk.

“God is good,” she said, adding she has no residual problems from the disease.

At the age of 13 she had shingles and meningitis and on three occasions the doctors told her parents she would not live and to prepare for her funeral.

Even with losing everything in Hurricane Harvey and being rescued by airboat — the water was chest deep when she, her parents and nephew were living in the Vista Village area off Texas 73 — you can make it.

“Even though all my adversities and all the trials and tribulations I’ve been through, you can make it,” she said. “You can make it out of any situation and it’s not always gong to be easy. I have a saying that life is not gong to be unicorns and rainbows, but you have to definitely take those lemons and make lemonade.” 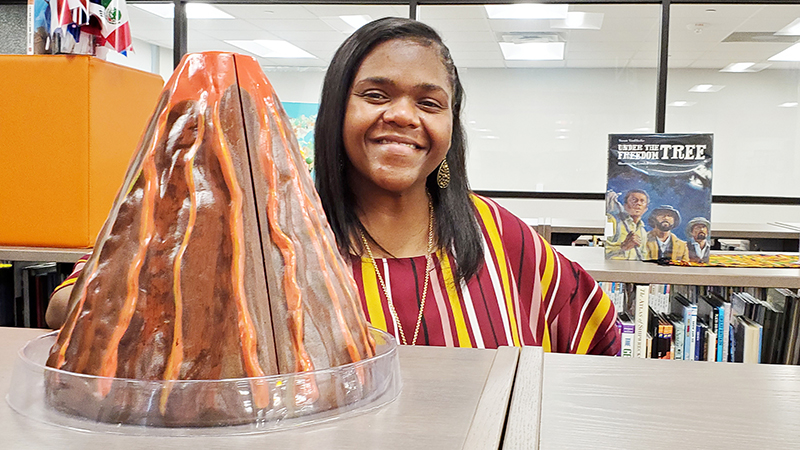 Edreauanna didn’t plan to become a teacher. In fact it was a career she did not want. Initially she headed to the University of Oklahoma, where she planned to work on a degree to be a petroleum engineer. Halfway through she realized this wasn’t what she wanted so she graduated with a degree in human resources and returned home.

She also had an insurance license and worked for Aflac for a year. It was God who directed her to the field of teaching and that’s something she’s grateful for.

“My mom and dad always said I’m a natural at it, that I have a knack for working with children and being able to relate things to them,” she said. “I’m grateful now that I’m following in their pathway.”

She saw adversity once again when she decided to go for her master’s degree in educational administration at Lamar University. She started the program in June 2017 then Harvey hit that August.

She and her parents lived with her brother in Katy for the first four weeks, then they stayed in a hotel and she drove back and forth to Port Arthur to teach.

Eventually they found a hotel locally before the family got a Federal Emergency Management Agency trailer placed on their property.

She worked on her master’s degree in an online program during all of this and graduated in 2018. In February of 2019 her parents and her were able to move back home.

She called it a humbling experience, where one day you’re getting ready to start the school year and the next day you literally have nothing. Between her and her parents they lost five automobiles and everything in their home.

“The water sat in our neighborhood a week after the storm,” she recalls. “Of course, you know what heat, moisture and water do; mold. When we were finally able to get back in our home, everything that could have probably been saved had molded and literally everything in our house had to go.

“One of the hardest things in my life, through sicknesses, through illnesses, was standing across the street looking at my whole life in a trash pile. It’s like, ‘OK God.’”

Edreauanna’s parents are people of faith and she leaned on her faith to make it through.

“Even when I would go to Texas Children’s or go to the hospital, my mom would say, ‘Edreauanna, no matter how bad you think your life is, someone always has it just a little bit worse,” she said. “So be thankful for whatever God brings into your life, whether it be good or bad, whether it be illness, or losing our possessions in Harvey.”

Her mother taught he and her brother, Eddie II, to look for the good in every situation and even now with virtual and in-person learning during a pandemic that is even more important.

Instead of backing away from the challenge ahead of her, she meets it face first and on a positive note saying there’s a silver lining in every cloud.

“God has destined you for the journey and the path that you are on,” she said when asked what message she would like to impart to others.

Everybody’s journey and path is different. You will have bumps, bruises, good days and bad days, mountain highs and valley lows but at the end of the day those things happened to make you the person you are, she said.

Another thing that helps her is knowing she is going through things in her life in order to help others.

“What I’m dealing with or what I’ve been through, it may not have been necessarily to affect me but it may have been to help someone else along the way, along their journey, along their path,” she said while tearing up. “What we go through in life is not always just for us, It’s to help others as well.”

For other profiles read: https://www.panews.com/2021/02/26/black-history-profile-dwight-scypion-coaching-to-save-kids-from-the-streets/