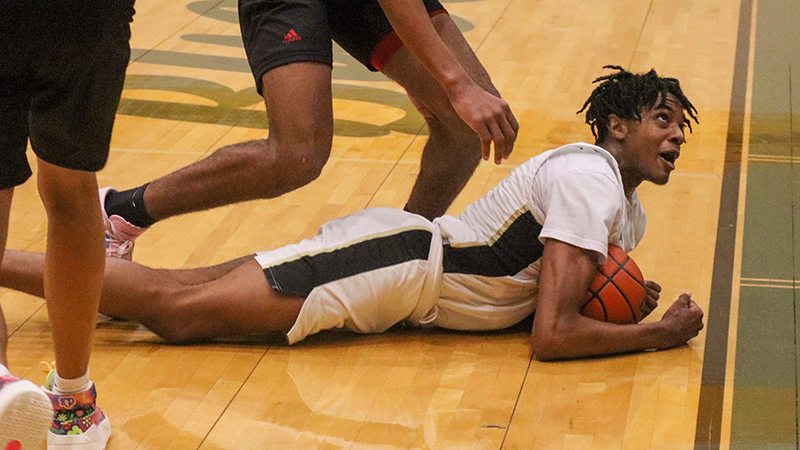 Nederland’s Tyler Jackson dives for a loose ball and calls a timeout during the Bulldogs’ 79-66 loss to Goose Creek Memorial at East Chambers High School on Monday. (Chris Moore/The News)

The Nederland Bulldogs shuffled off the court as the final buzzer sounded at East Chambers High School Monday. The one facet of their game that had been prominent all season failed them the most as their usually stout defense allowed a season-high in points as they fell 79-66 in the bi-district round of the 5A playoffs. 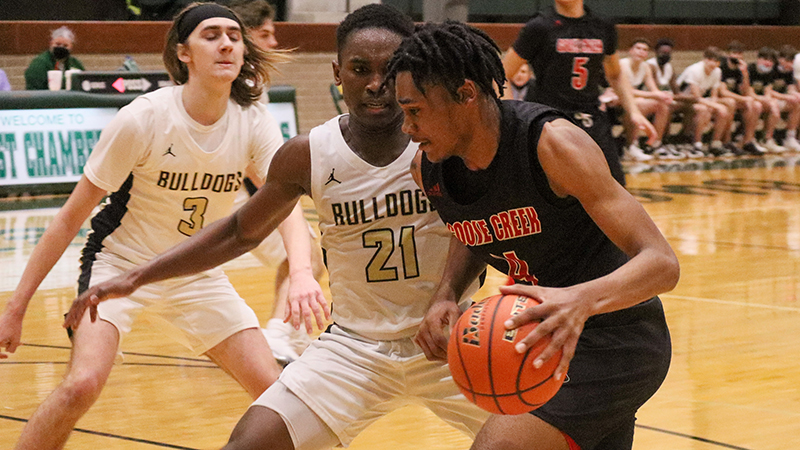 The Goose Creek Memorial Patriots, buoyed by 11 made threes, knew the game was well in hand with a double-digit lead late in the fourth quarter as Nederland’s leading scorer for the season Tyler Jackson fouled out.

In his last game for the Bulldogs, the senior went to the bench dejected.

He finished the game with 25 points, second only to teammate Joseph Gipson, who had 28.

The Bulldogs were on fire early, jumping out to a 23-13 lead in the first quarter.

Gipson and Jackson set the tone for Nederland, combining for 17 points.

The roles reversed in the second quarter as the Patriots roared back to outscore the Bulldogs 23-11.

“We had a great start,” Nederland head coach Brian English said. “The kids played well and came out ready to play. Tyler got into a little foul trouble. It’s basketball. It happens. They did a great job and shot the ball really well.”

English said the three-pointer differential played a large role in the loss. 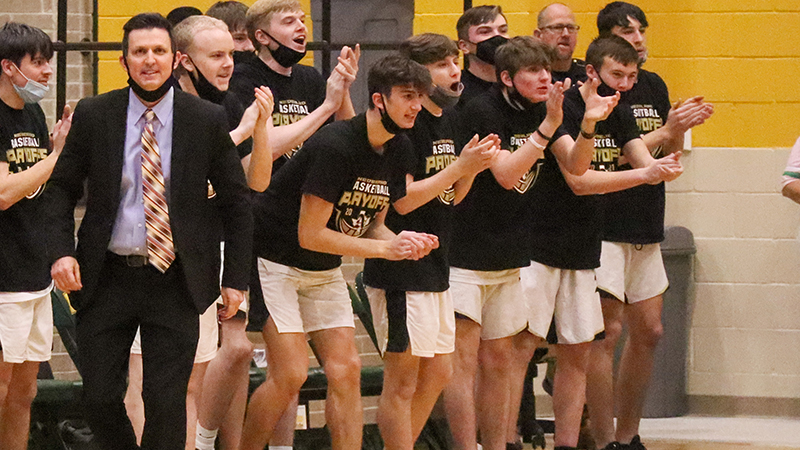 The Nederland bench cheers on the Bulldogs during the second half of their game. (Chris Moore/The News)

“The problem is that you get out there and get too tight,” he said. “If you get too tight and close out, they are quick enough to go by you. They did a great job and they were the better team tonight.”

The Patriots stretched their lead to 10 points in the third before Jackson, who recorded 10 points in the quarter, hit a three-point shot to bring the Bulldogs within five points with 2:48 left.

That was as close as the Bulldogs would get for the rest of the game as the Patriots made their way to the rim, eventually fouling Jackson out for the game in the fourth quarter.

With the length of Jackson off the floor, the team that shot well from behind the arch began punishing the Bulldogs’ lessened interior defense to close out the game.

“I told them I appreciate them,” English said of his team. “They had a great year this year and I am proud of them. I’m proud of their effort and character more than anything. I am very proud of them.”

English said he was particularly proud of Jackson’s maturation during his time with the Bulldogs.

The Bulldogs finished the season with a 20-6 record and made the playoffs for the 13th-consecutive year. 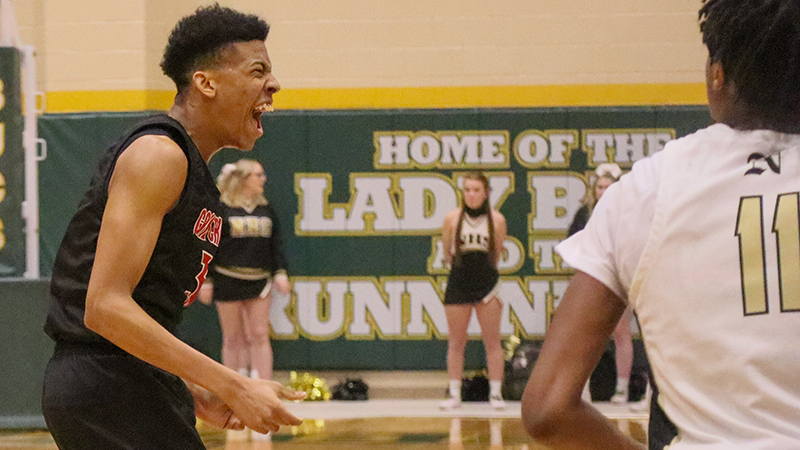 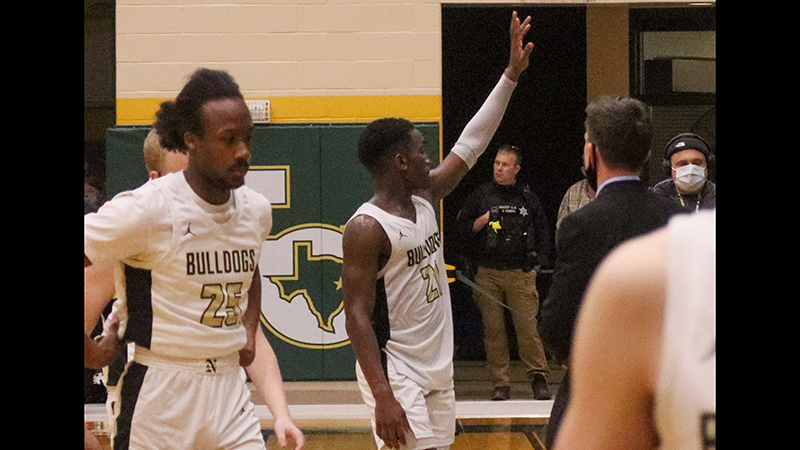 Senior Joseph Gipson (21) waves to the fans after his last game. 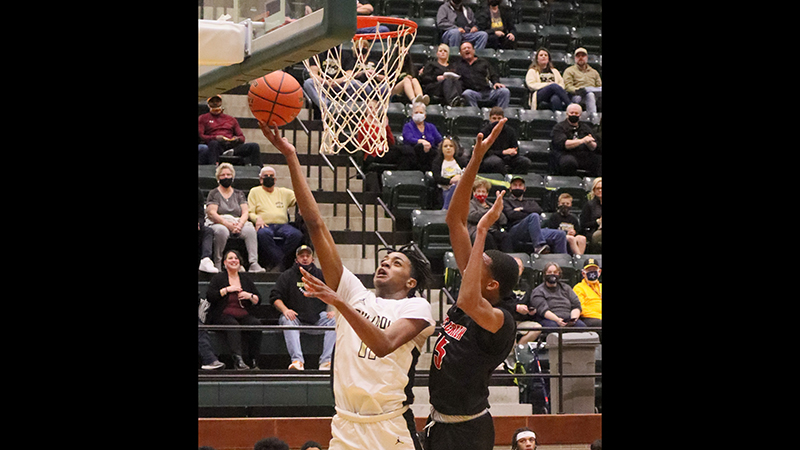 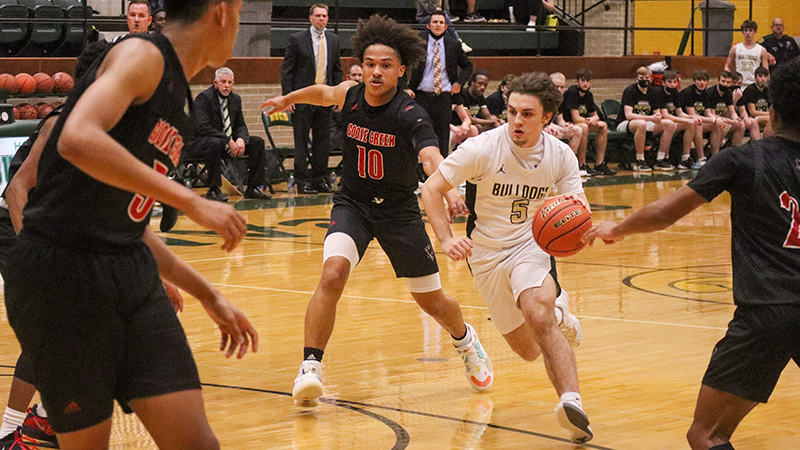 Joey Hebert drives to the basket