Dad: As van was on fire, all anyone did was record flames on their cellphones 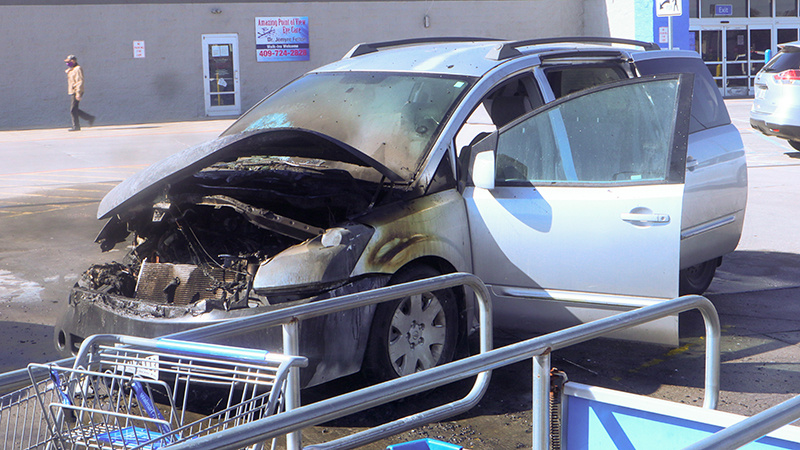 A burned-out mini-van is seen Friday in Port Arthur.

Willie Bryant dropped off his girlfriend at work Friday morning in Lumberton before heading to Port Arthur to handle family business.

He planned to get his three sons — ages 5, 6 and 9 — haircuts and drop off his 8-year-old daughter at home.

He noticed the family van was having trouble accelerating past 60 mph and decided to exit near WalMart off U.S. 69 in Port Arthur.

“When I stopped, this lady flagged me down and said, ‘your car is on fire,’” Bryant said. “I pulled over, parked and saw smoke. I got out of the car, looked at the bottom and it was on fire. All my children were asleep, so I woke them up and told them, ‘get out of the car.’

“What made me aggravated was nobody asked if I had more children in the car. They all started pulling out their phones and recording. That spoke very much in all type of volumes about society today. I got the kids to safety, backed up far away.”

Bryant was grateful the woman who initially flagged him down offered to let the children sit in her car to stay warm and get out of the cold. Bryant said she was the only bystander who offered to help throughout the process despite many people watching the events transpire.

With the minivan still burning, Bryant went back inside to pull out children’s car seats and whatever else he could grab before running inside Walmart and asking for a fire extinguisher.

Someone inside Walmart called first responders at 9:54 a.m., leading to fire department response.

According to Bryant, his children reacted quickly and exited as soon as he woke them and no one appeared too shook-up with the ordeal.

Heather Marie Shields identified herself on the Port Arthur News Facebook page, describing the scene by saying. “I’m just glad that I was able to help. Unlike everyone else with their phones out recording.”