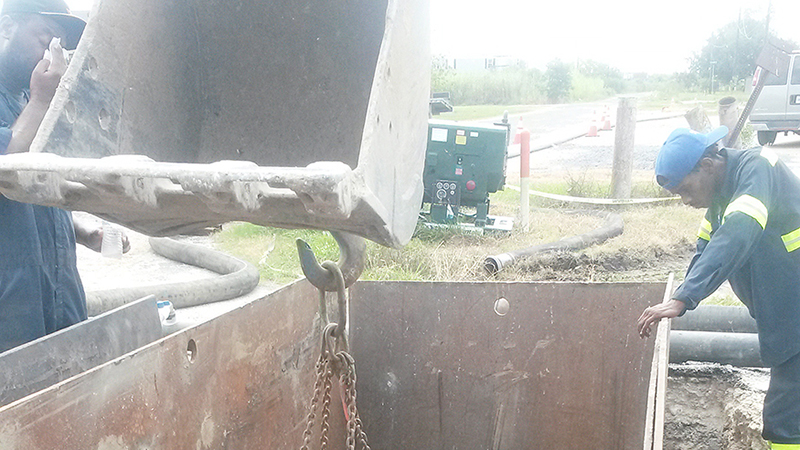 City officials warned Friday morning that it could be three days or more for Port Arthur’s water system to return to normal.

Any date for full restoration is an educated guess at this time due the unprecedented level of this week’s freeze and the wide-ranging damage it caused, according to interim director of utility operations Donnie Stanton.

Drones, infrared imaging, helicopters and all-terrain vehicles are some of the ways city crews are working to find water line breaks that are wreaking havoc on the distribution system.

Residents continue to deal with low water pressure, or in some cases no water.

Stanton said they have a good indication there is a really bad water line break south and east of Texas 73. By turning off a valve that supplies the aforementioned area, water pressure builds up — leading officials to note this area likely has a major leak.

One problem is that the city is 111 square miles with 350 to 375 miles of pipeline. In addition, there are many areas unpopulated.

Crews used infrared during a helicopter fly-over on Friday to help access damage.

“We have two of our most experienced distribution guys going up (in the helicopter) and will look for warm water on the cold ground,” Stanton said.

And they are not alone. City personnel are looking for leaks, people are using ATVs and partners in industry are helping and Jefferson County Drainage District 7 staff members are also helping keep an eye out for leaks.

The Supervisory Control And Data Acquisition, or SCADA system, is a computer system used to manage levels in the water towers.

With the unprecedented freeze, those electronic devices froze.

Stanton said parts for SCADA have been ordered and are being expedited from out of state. Once delivered and installed, employees can check the towers to determine where the leaks are centralized.

Stanton noted residents aren’t the only ones affected by the water distribution— the city’s industrial partners are in the same situation.

“The mayor, city council and industry is committed that residents get water before industry gets water,” he said.

Mayor Pro Tem Charlotte Moses, like other councilmembers, has been in touch with city personnel on the issue.

Moses and several councilmembers are without water services at this time, she said, brings back memories of Hurricane Harvey.

It’s unprecedented, like a 100-year flood, she said, noting meteorologists believe this type of freeze hasn’t happened since 1906 — and is something the whole state is dealing with.

“This is bigger than us, it’s bigger than politicians right now,” she said. “I don’t know how you can prepare for Harvey.”

She commended the many crew members on the ground working to find the leaks while battling frigid temperatures.

District 3 Councilman Thomas Kinlaw III said he rode around and saw a lot of workers busting their butts to make sure the water gets turned back on.

During a remote city council meeting Friday, Kinlaw applauded Stanton and his team for their efforts.

The worst case scenario of how long residents could be without water is up in the air.

“I don’t have a good answer, but three days is not out of the question,” Stanton said Friday morning, considering the size of the city.

This situation is something Stanton has never faced before. While new to his current position as interim director of utility operations, he has been in the water and sewer industry for 30 years.

“Every water event is different with different challenges and this is the most unique I have ever dealt with in my career,” he said. “The 2018 freeze also affected our system but not as severe or as fast.”

The 2018 freeze had two major line breaks that drained the system, he said.

The city’s water plant maxes out at about 20 million gallons a day but currently is not filling the water towers or pressurizing the lines.

The freeze caused movement in the ground, which contributed to the leaks.