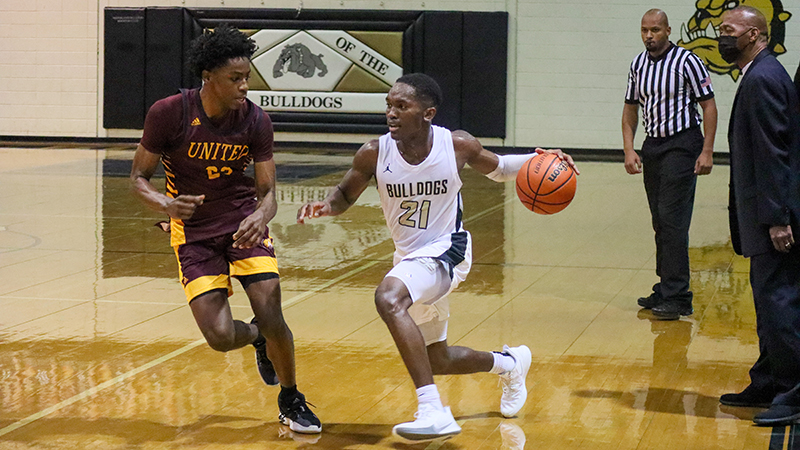 Nederland’s Joseph Gipson (21) looks for driving room during the Bulldogs’ 51-29 loss to Beaumont United at the Dog Dome on Friday. (Chris Moore/The News)

All sporting events for Port Arthur and Port Neches-Groves Independent School Districts have been canceled for the rest of the week.

Nederland had not made a definitive decision about Friday’s basketball playoff game by Wednesday afternoon.

Nederland athletic director Monte Barrow said the University Interscholastic League elected to move the certification deadline for the bi-district round back to allow teams more time to play first-round games.

The Nederland boys basketball team was scheduled to play Goose Creek Memorial in the opening round of the playoffs at East Chambers High School in Winnie Friday.

While the game was still scheduled to go on as planned as of Wednesday, Barrow said he is doubtful.

Nederland ISD was the only school district in the area to not rule out the possibility of in-person learning for Friday.

PAISD and PNGISD canceled in-person classes and sporting events for the rest of the week.

“(UIL) said if your bi-district game is set and can be played, you can go on and play it,” Barrow said. “It won’t come down to a situation to where if you can’t play Friday, you have to flip a coin.”

Memorial athletic director Brian Morgan said Memorial was scheduled to host playoff games over the weekend, but would no longer do so after the decision to close the district.

Barrow said soccer teams will likely have to cram district games together in order to get back on track.

“We might have a scenario where we play three or four games in a week,” he said. “We don’t know when the soccer games will be played just because between us and Galena Park, one can be OK sooner than the other. Everything is getting pushed. We are just waiting and seeing what happens right now. UIL may do the same thing for soccer as they did with the basketball games.”

Morgan said his coaches and student athletes are in a similar boat to everyone else in the county.

“For the most part, electricity is back on,” he said. “I think the lack of water pressure is pretty consistent for everyone. Everyone is just moving along. We are doing all right. They are young kids. They are OK.”

PNG athletic director Brandon Faircloth said local schools are used to dealing with natural disasters, but the temperatures causing the shuffle are a first.

“That is definitely a first in Southeast Texas for me,” he said. “All schools down here have learned to be very flexible, especially PNG. We’ve dealt with this a few times. I know our administration has a great handle on things. Our kids do a great job of being resilient and are ready to compete whenever they get the chance.”