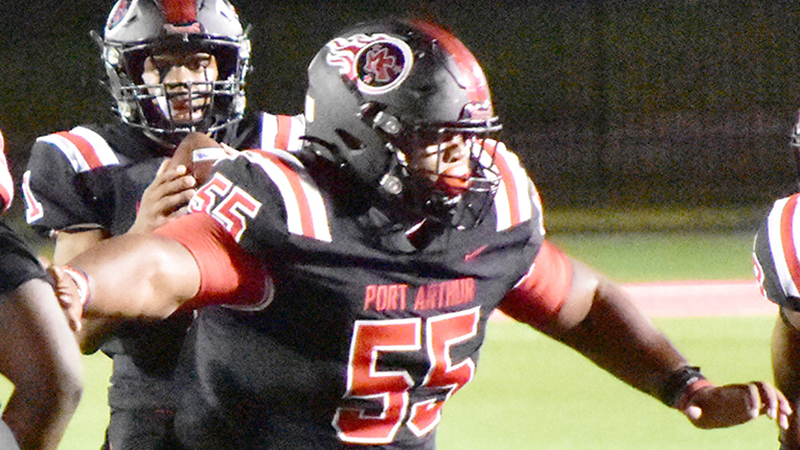 BEAUMONT — Lamar University football’s 2021 recruiting class has been ranked 13th nationally according to 247Sports.com. The poll coming less than a week after head coach Blane Morgan and his staff put the final stamp on their second signing class.

The class — which also was picked as the second best in the Southland Conference — ranked ahead of traditional NCAA FCS powers North Dakota State, Montana State, Northern Iowa and South Dakota State as well as finishing ahead of instate FBS program Texas State.

One of the class highlights in Memorial High School center Tre’Vonte Caines, who signed a letter of intent to play for the Cards next season.

He helped lead the Titans to the first undefeated regular season in school history and played a key role in the No. 1 offense in District 9-5A Division I.

While Caines has played all over the offensive line throughout his time at Memorial, Titans coaches say the senior was recruited to play defensive line, which is his true passion.

“This class was very important to us,” Morgan said. “We knew it was going to be our first class that we had a full year to recruit and see some of the fruits of our labor. Our coaches have done a great job evaluating talent.

“Recruiting is all about relationships and getting the players and their coaches to trust us and to buy into our vision for the future,” Morgan said. “Developing those relationships is a huge part of the process and that process was obviously made much more difficult this year with COVID. Our coaching staff worked tirelessly to overcome those obstacles.”

The Cardinals 2021 class is one of the largest in program history, including 30 total signatures – all standouts from the prep ranks.

It was a balanced class that saw 16 signatures on the defensive side of the ball, 14 on offense and two specialists.
The LU coaching staff originally inked 25 during the early period, and added five new names on National Signing Day. The class also includes three three-star players to go along with numerous two star players. Overall, the Cardinals ranked 143rd nationally when combining all NCAA FCS and FBS programs.