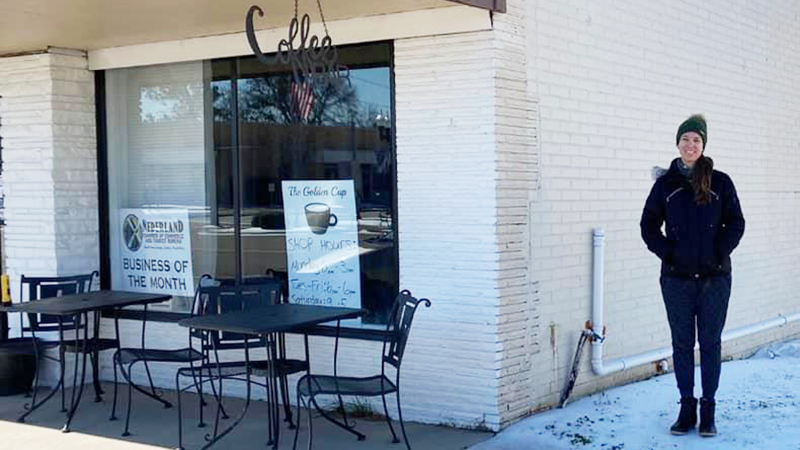 All the snow, ice and lingering impacts of this winter freeze have forced Janna Bartz to keep Nederland coffee shop The Golden Cup closed.

NEDERLAND — Janna Bartz opened her own coffee shop — The Golden Cup — in February of 2020 on Boston Avenue in Nederland.

She’s already experienced a pandemic and two hurricanes, so she thought reopening after a winter storm wouldn’t be too crazy.

Unfortunately, the unreliability of electricity, water pressure and quality materials has prevented her from opening this week.

“Until I get the water pressure up and good drinking water, I’m really not going to be able to function properly,” Bartz said Wednesday afternoon. “Why am I going to get any supplies when we might have another rolling outage?”

An extended downtime following a snowstorm was not something that crossed her mind last week. However, the business owner admits she is learning a lot about how to better prepare and things to take into consideration before a storm hits.

Her first priority is making sure staff members are OK and can safely get to work.

“Second, am I able to get the essential supplies I need,” she said. “Third, I want to give the community the quality coffee I have been able to deliver, and I can’t do that in the circumstances right now.”

The unanswered questions have left an unknown reopening date.

“I can’t say that yet,” she said. “I was hoping to open maybe Tuesday afternoon, then I changed it to maybe Wednesday morning, but at this point, I really don’t know.”

Many City of Nederland employees who made it to work Tuesday morning were greeted without working phone lines.

The phones, fortunately, were restored to working order by noon Tuesday, but that was just the beginning of the day’s problems, the impacts of which will be felt throughout this week.

The Nederland water plant lost power, along with a large portion of the city, at 7 p.m. Tuesday.

“We are hoping somewhere in the next 24 to 36 hours that we can get out of this,” City Manager Chris Duque said Wednesday morning. “So much of that depends on our customers. We are dealing with leaks and water line breaks in houses or businesses, and we need those to be reported to us so we can shut it off and stop that bleeding until they can get a plumber out there to make the repair.”

Nederland issued a boil water advisory on Tuesday, and just about everyone in the city is also dealing with low water pressure and rolling blackouts.

Water conservation is an absolute for the city, Duque said.

“This is probably the worst I have ever seen, but we have a great crew at the water plant who are busting their rear ends to get things done,” he said. “We’re going to get this done. We just ask for the community’s help in doing their part as customers. We ask for some patience as the system takes time to recover. It’s a lot of water; it’s not going to take a couple of hours, it’s going to take a good amount of time.” 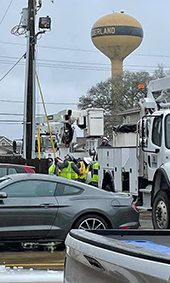 He described this week’s freeze as a historically severe event.

Nederland officials did not have to respond to any house or business fires in the first two days of the freeze, but response to slips and falls on ice have kept first responders busy. 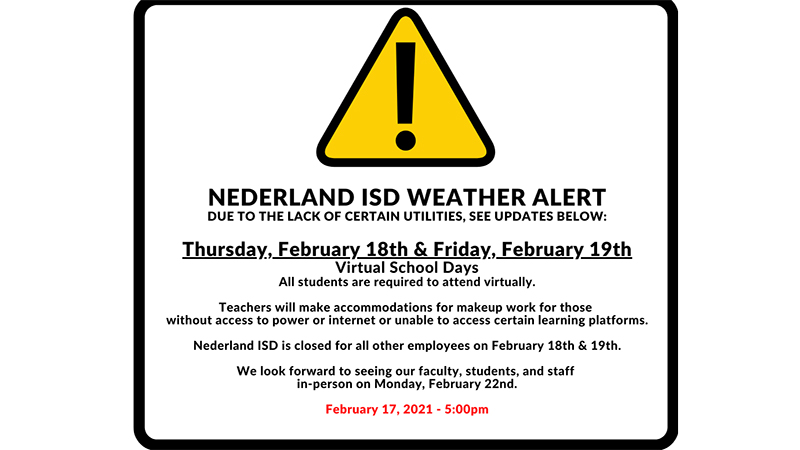 The result of each meeting has been NISD’s plan for the coming day’s instructional model. This week that has meant remote learning, because campus instruction is not safe.

“We take it day-by-day and try to make the decision for the next day everyday by noon,” Kieschnick said, adding the aftermath from this week’s snow storm has been every bit as bad as previous hurricanes.

“What we don’t know yet is the structural damage. With a hurricane, you know the damage a lot quicker. In a freeze, you don’t really know the damage.”

To have schools open back up, Kieschnick must feel comfortable that the NISD can provide good water, constant electricity and have teachers available for work.

“We didn’t start school until the second week of September because of our preparations to go virtual,” Kieschnick said. “We didn’t want to go virtual until we were at least somewhat ready, so we postponed the start of our school year for a month and trained our teachers. We used that training with the philosophy of, ‘if we ever have to go virtual, we want to be able to do it in one day.’”

Kieschnick cited that preparation for strong remote learning responses that have taken place this week.

“I’m not saying it is perfect, because people had rolling blackouts,” he said. “It’s hard to do virtual learning without electricity, but it was better than expected due to our planning back in August and September.”

All of Port Arthur, Mid-County under boil water advisory;…