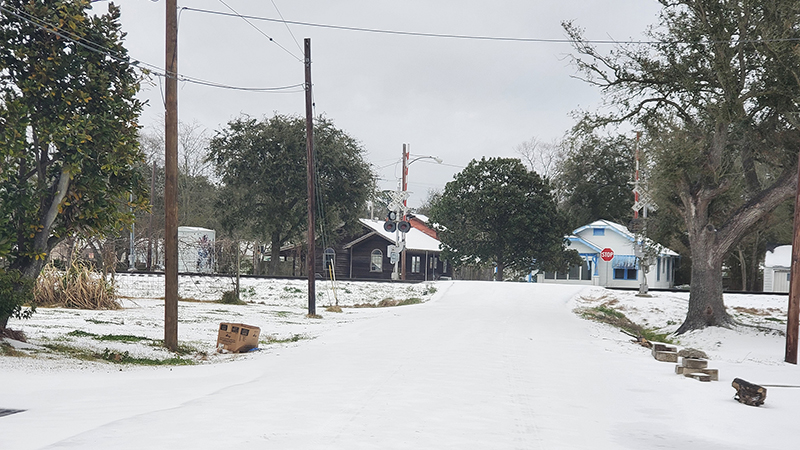 Southeast Texas saw between 1-2 inches of ice and snow over two days, with the coldest temperatures recorded Tuesday morning, a meteorologist for the National Weather Service said.

Tuesday morning’s clear skies were a welcome sight to many as temperatures dropped to 14 degrees.

“We’re going to stay very cold,” meteorologist Donald Jones said. “We are going get above freezing. The sunshine out there is doing a pretty good job of melting the ice off of roadways, so I don’t expect travel hazards to be too much of an issue here going forward.”

Those moving about outside their homes should still be careful.

The Medical Center of Southeast Texas has seen a “significant uptick in orthopedic injuries,” according to marketing and communications director Angie Hebert.

“We have seen broken ankles, legs, shoulders, arms, wrists etc.,” she said. “These are due to slips and falls on ice. We’ve definitely seen an uptick in injuries. It is a lot more than we normally see.”

While some ice has begun to melt, Hebert said conditions around the medical center are still icy.

“If I had ice skates, I could skate all over our parking lot,” Hebert said Tuesday morning. “There is a solid two inches of ice all over the parking lot. It’s impressive.”

Hebert said the center has not seen any hypothermia or cold-related illnesses as of Tuesday. This could be due to the amount of places offering shelters for the homeless community in Southeast Texas.

Jones said the area will see some precipitation Wednesday morning.

“We’re looking at close to a 100 percent chance of rain Wednesday morning,” he said. “The winter weather seems like it is going to stay well above the area, like near Jasper. I think by the time most of the precipitation gets here, it is going to be above freezing.”

Jones said the coldest temperatures have passed, but the next several nights will likely produce more freezing temperatures.

“It will probably be for the next few nights, so keep that in mind when taking precautions around the house,” he said.

Jones said the 14 degree weather Tuesday obliterated the previous same-day record of 25 degrees set back in 2007.