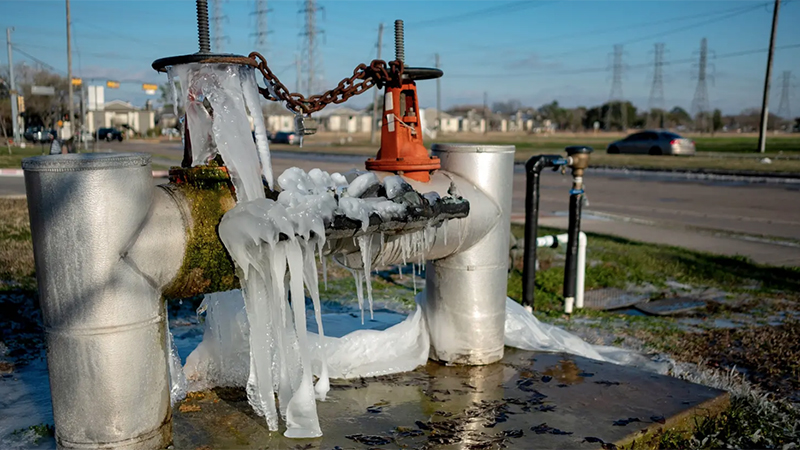 A utility structure is encased in ice on Feb. 15, 2021, in Houston. A rare snow blanketed the city as well as other parts of Texas. (May-Ying Lam for The Texas Tribune)

Two of Texas’ top elected officials called for legislation and investigations into the operation of the state’s power grid after a massive winter storm caused millions of residents in the state to lose power for long spans during frigid temperatures.

Gov. Greg Abbott on Tuesday declared the reform of the Electric Reliability Council of Texas an emergency item for the 2021 legislative session.

The declaration marks the issue as a top priority and allows lawmakers in the House and Senate to approve bills on the subject during the first 60 days of the session. ERCOT is a nonprofit that manages the grid used by about 90% of the state.

“The Electric Reliability Council of Texas has been anything but reliable over the past 48 hours,” Abbott said in a statement.

“Far too many Texans are without power and heat for their homes as our state faces freezing temperatures and severe winter weather. This is unacceptable.”

The governor’s latest announcement came hours after Texas House Speaker Dade Phelan asked two committees in the lower chamber to hold a joint hearing later this month to review the outages. Phelan, a Beaumont Republican, requested the House State Affairs and Energy Resources Committees convene for the hearing on Feb. 25.

“We must cut through the finger-pointing and hear directly from stakeholders about the factors that contributed to generation staying down at a time when families needed it most, what our state can do to correct these issues, and what steps regulators and grid operators are taking to safeguard our electric grid,” Phelan said in a news release.

Neither Abbott nor Phelan proposed specific fixes for ERCOT or the state’s energy supply and it’s unclear what ideas they might have in mind.