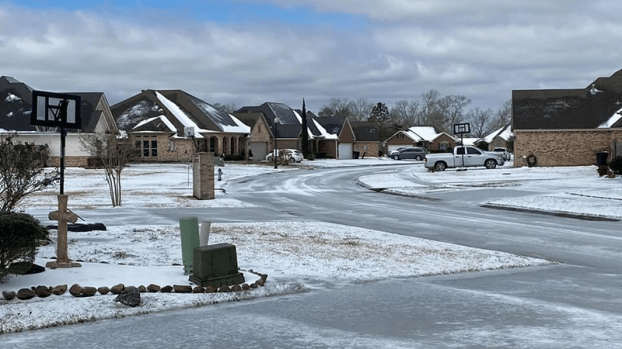 Sterling Ridge is seen in Nederland.

Even with an accumulation of sleet and snow, the roadways have been pretty much free of major traffic crashed, local officials in Port Arthur and Mid-County said Monday afternoon

Neither Port Arthur Police or Groves Police had any major incidents to report as of mid-afternoon. There were none in Nederland or Port Neches either, according to those cities’ police chiefs.

“We haven’t had anything major, most everybody has been staying at home and we appreciate it,” Nederland Police Chief Gary Porter said. “There is a lot of slush fixing to freeze and be very treacherous.”

Porter did note several people on ATVs acting irresponsibly and the city had some power outages.

Port Neches Police Chief Paul Lemoine likewise didn’t report any major wrecks or any crime out of the ordinary but did see an “illegal kayaker.”

The kayaker wasn’t paddling the waterways but had placed a kayak at the top of a hill at Port Neches Riverfront Park, ran and jumped into the kayak and slid down the hill.

Texas Department of Public Safety is urging all citizens to avoid using recreational equipment — such as skis or sleds — on public roadways, bridges and overpasses, according to information from DPS Sgt. Stephanie Davis.

“Vehicular traffic and first responders are still utilizing many roadways, and the poor driving conditions significantly increase stopping distance and a driver’s ability to steer away from danger,” Davis said.

Monday’s wintry precipitation has ended, Weather Service says, adding what to expect next

The wintry precipitation has ended, according to the National Weather Service as of 2:30 p.m. Monday. Warning Coordination Meteorologist Roger... read more