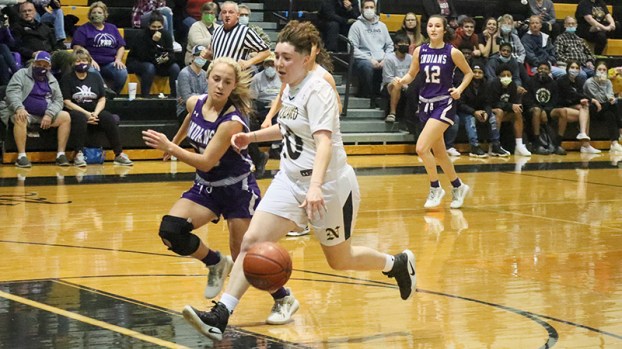 Zea Flores (10) drives to the basket during the Bulldogs’ 49-37 win over Port Neches-Groves at the Dog Dome Monday. (Chris Moore/The News)

The Nederland girls basketball team fell 77-44 to Manvel in the bi-district round of the 5A playoffs Thursday.

The Bulldogs clinched the fourth seed of District 21-5A by beating Galena Park last week. Nederland finished the season with a 8-11 record including Thursday night’s loss.

The Bulldogs made it to the postseason for the second year in a row.

Manvel finished its regular season with a 21-5 record (15-1 in their district, which was good enough to earn the No. 1 seed).

Head coach Jody Walker said he is proud of the way his team battled through the unique season.

“I think it was pretty special for the seniors to have a season with everything that is going on,” he said. “There were cancelations and quarantines. For them to have a chance to finish the season and play, that is something they will be able to take with them.”

The Bulldogs entered the district season 3-4 before falling to Memorial 53-52 in a close loss.

Their first win of the district came against Mid County rival Port Neches-Groves in a 58-49 win at PNG High School. The Bulldogs had a propensity to win tight contests, going 4-3 in games decided by 10 points or fewer.

“That is the whole key,” Walker said. “You start playing those teams that you aren’t ‘supposed to beat.’ You realize you are not that far away and that it is not out of reach.”

Walker enjoyed watching is team mature throughout the course of the season.

“I was able to see from where they started to the very end,” he said. “The team went through a lot of adversity. They learned to deal with it and they coped. They were able to pick it up and keep moving.”

Walker said his team was able to play Manvel close in the first quarter and fought back to get within 10 points in the third.

“We knew who we were facing,” he said, “They are a good team. They are state ranked for a reason. They lost one game in district for a reason. We knew what we were up against. They have an aggressive style of play on defense. They had two good girls who could take care of the ball and shoot really well. I was proud of the way the girls fought back. We were right there and battled in the first and second quarter.”

Walker did not say much to the team following the game because he knew players and their families were trying to get home, but he said he did have a message for his team as the game wound down.

“I told each one of them how proud I was of them,” he said. “We had one girl that was battling an injury. It was one of those things that is hard to understand from the outside. The competitor in you always wants to win but I was really proud of them.”

Seahawks looking to even their record with upcoming schedule