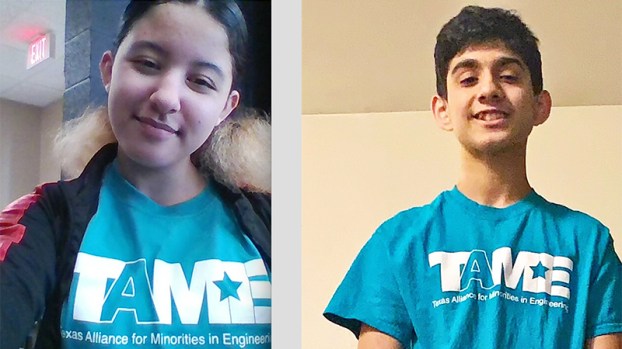 Now those ninth graders’ efforts are getting noticed in competitive scholastics engineering competitions.

The Memorial 9th Grade Academy students recently joined other students from the Golden Triangle in the GT TAME Divisional Competition on Engineering Design Challenge conducted by the Texas Alliance for Minorities in Engineering and Lamar University.

Starks took home a first place finish, and Singh earned a second place finish, together with their respective groups, which advances to the Alliance’s State Competitions in April.

Algebra I teacher Emerzen Echavez, who has Starks and Singh in his class, said they are smart and hardworking, adding they complete work with high scores and have excellent grades.

“No words can describe that students from Port Arthur can also excel in the fields of mathematics and science and not only in sports,” Echavez said. “We just have to push our students to their limits and bring out the best in them.”

This month’s competition asked participants to maximize the production of oil rich deposits by identifying their locations from a coordinate grid. The sponsor of this year’s competition is Sonoco-Phillips.

Locations are based from the preliminary questions they answered when acquiring for a permit to drill.

Some students who belong to the GT TAME M9 Club in Port Arthur joined a Virtual Coding Workshop with Lamar University over the Fall.

They also had a briefing on what to expect and what to prepare for on competition day through a Zoom meeting.

Starks and Singh were on different groups.

Starks was her group’s production engineer responsible for explaining to judges why they chose to drill on a specific grid. She also did an optional activity, which is completing the Sudoku earning her group more points to drill more holes.

Singh was assigned as the group geologist. He recommended areas of maximum oil deposits where they drill the holes.

Echavez said they made sure to help each other and share the screen if someone needed help from their team.

Police believe suspects identified in cluster of car burglaries in Nederland, across region

NEDERLAND — Nederland is once again seeing clusters of auto burglaries and has identified suspects. There were four reported vehicle... read more